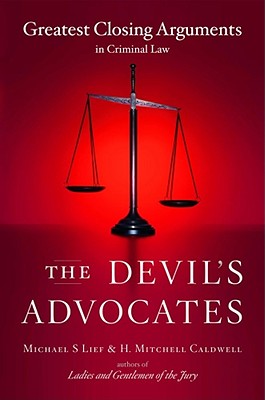 In The Devil's Advocates, Michael S. Lief and H. Mitchell Caldwell turn to the dramatic crimes and trials of criminal law. The eight famous cases in this riveting collection have set historical precedents and illuminated fundamentals of the American criminal justice system. Future president John Adams illustrates the principle that even the most despised and vilified criminal is entitled to a legal defense in the argument he delivers on behalf of the British soldiers who shot and killed five Americans during the Boston Massacre. Clarence Darrow provides a ringing defense of a black family charged with using deadly force after defending themselves from a violent mob - an argument that refines the concept of self-defense. And perhaps the best-known case is that of Ernesto Miranda, the accused rapist whose trial led to the critically important Miranda decision, which underpins procedure at every criminal arrest.

Each case presented is given legal and cultural context, including a brief historical introduction, biographical sketches of the attorneys involved, highlights of trial testimony, analysis of the closing arguments and a summary of the trial's impact on its participants and our country. In clear, jargon-free prose, the authors make these pivotal cases come to vibrant life for every reader.
Michael S Lief is a senior deputy district attorney in Ventura, California. A former newspaper editor, he was a submarine driver for the U. S. Navy during the Cold War.

H. Mitchell Caldwell is a professor at Pepperdine University School of Law. A former deputy district attorney, he specializes in death-penalty litigation before the California Supreme Court.
"The mark of good literature is that it serves to teach and to delight. The Devil's Advocates does both, and it also inspires." - The Federal Lawyer

"Some of the cases are famous, some are infamous, and some are obscure, but all are revealing page-turners...A readable and fascinating book. - Library Journal

"An unexpectedly gripping read. Lief and Caldwell have a gift for cracking a case open and making potentially dry details vivid...[The book] emerges as an unusual and informative legal history, offering clear views into earlier eras of legal thought and practice." - The American Lawyer