Long Way Round: Chasing Shadows Across the World (Paperback) 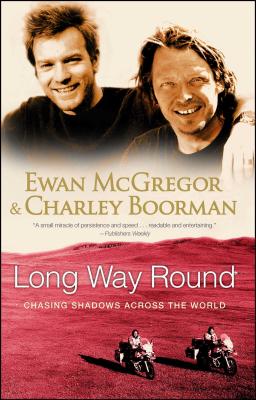 Long Way Round: Chasing Shadows Across the World (Paperback)


Not On Our Shelves—Ships in 1-5 Days
It started as a daydream. Poring over a map of the world at home one quiet Saturday afternoon, Ewan McGregor -- acclaimed actor and self-confessed bike nut -- noticed that it was possible to ride all the way round the world, with just one short hop across the Bering Strait from Russia to Alaska. It was a revelation he couldn't get out of his head. So he picked up the phone and called his fellow actor-slash-biker friend Charley Boorman and told him it was time to hit the road....
Long Way Round
Beginning in London, Ewan and Charley chased their shadows through Europe, the Ukraine, Kazakhstan, Mongolia, and Russia; across the Pacific to Alaska; then down through Canada all the way to New York. Long Way Round is the result of their four-month, 20,000-mile joyride. Featuring original diary entries, travel maps, mileage charts, and dozens of photographs, this is a freewheeling, fully charged, and uproariously entertaining book about two world-famous individuals who chose the road not taken...and made the journey worthwhile.
Ewan McGregor was born in Perthshire in 1971. An actor who has appeared in more than thirty films -- Trainspotting, Velvet Goldmine, Moulin Rouge, and the second Star Wars trilogy among them -- he rides an MV Augusta F4S and a KTM Duke. He lives in London with his wife and two daughters.

Charley Boorman was born in England, grew up in Ireland, and currently lives in London with his family. An actor whose first starring role was in Deliverance, he met his costar Ewan while shooting The Serpent's Kiss. He rides a Ducati 748 and is preparing for the2006 Paris -- Dakar rally, if his wife lets him
"A small miracle of persistence and speed...readable and entertaining."
-- Publishers Weekly