Mammoth Math: Everything You Need to Know About Numbers (Hardcover) 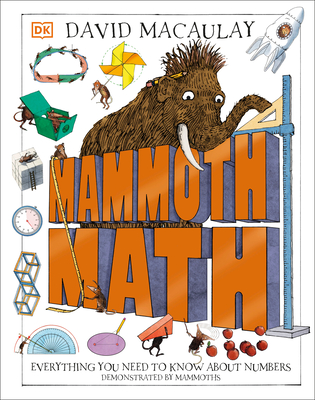 Mammoth Math: Everything You Need to Know About Numbers (Hardcover)


On Our Shelves Now at:
Introducing an off-beat guide to math from award-winning author and illustrator David Macaulay.

Math is all around you…if you look closely enough! From computer games to bridges, shopping malls to game shows, mathematics truly is everywhere. David Macauley’s terrific troupe of curious mammoths will lead you through the basics of math, including numbers, calculation, geometry, measurement and so much more in this highly original guide to math for kids aged 8+.

In Mammoth Math, not only will you learn the essential principles of math, you’ll enjoy learning about them too! From start to finish, the mammoths are your guide as they seek to understand the math!
These intrepid demonstrators will go to incredible lengths to educate and entertain, as they wrestle with adding or subtracting numbers, measuring angles, creating a pie chart, solving equations, and much more.
Observing and recording the mammoths’ behavior is best-selling illustrator David Macaulay. Renowned for his ability to explain complex ideas with simple genius, Macaulay captures the oddball humor of his subject matter, making Mammoth Math the perfect introduction to math for young learners to love.

Discover math as you’ve never known it before, with:

The ideal math book for all children aged 8+ as well as for reluctant math learners who don’t think math is for them, Mammoth Math includes a highly original and unique approach to the subject, with over 60 topics covered in total, including numbers geometry, measurement and operations. Encompassing all-new illustrations featuring Macaulay’s trademark mammoths, familiar to readers of The Way Things Work - a best-selling book of David Macaulay’s, which has sold over 3 million copies worldwide!

Join the math journey today! Solving the problem is only one mammoth ride away!
British-American artist David Macaulay is an award-winning author and illustrator whose books have sold millions of copies in the United States alone. He has won numerous awards including the Caldecott Medal and Honor Awards, the Boston Globe-Horn Book Award, the Christopher Award, an American Institute of Architects Medal, and the Washington Post Children’s Book Guild Nonfiction Award. In 2006 he received a MacArthur Fellowship. His work is renowned for its humor, detail, and ability to explain complex ideas with simple genius.
"[T]he information in the volume is instantly digestible and absolutely unforgettable, and that’s saying something." –School Library Journal, Starred Review