A Century of Spin: How Public Relations Became the Cutting Edge of Corporate Power (Paperback) 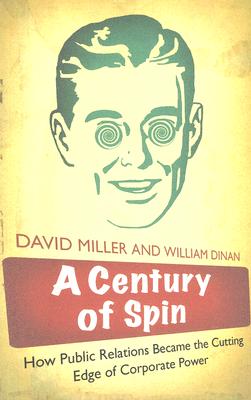 A Century of Spin: How Public Relations Became the Cutting Edge of Corporate Power (Paperback)


Not On Our Shelves—Ships in 1-5 Days
"Of all the transcendent powers that shape our modern lives, propaganda is the most powerful and insidious. This brilliant, original book reveals the secret truth about so-called public relations and should be required reading on every curriculum."
---John Pilger

This book charts the relentless rise of the public relations industry and how it has transformed our society. Revealing the roots of the PR movement in the years leading up to the First World War, it shows how it became a key tool in the struggle to subordinate democracy to corporate rule. It is the first book to offer a history of the emergence of corporate propaganda on both sides of the Atlantic during the 20th century.

The authors show how the origins of PR were always covertly political. Spin has been around for a long time and its anti-democratic potential is well known to all those who have made use of it. Based on extensive use of original archival material, the book presents a clear chronology of PR's development, including a detailed account of how US capitalists mobilized to tame FDR's New Deal and joint US-UK efforts to push for the deregulation of global markets.