Wings on My Sleeve: The World's Greatest Test Pilot tells his story (Paperback) 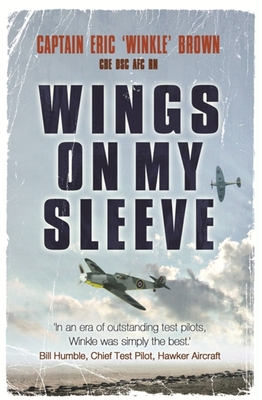 Wings on My Sleeve: The World's Greatest Test Pilot tells his story (Paperback)

The autobiography of one of the greatest pilots in history.

In 1939 Eric Brown was on a University of Edinburgh exchange course in Germany, and the first he knew of the war was when the Gestapo came to arrest him. They released him, not realising he was a pilot in the RAF volunteer reserve: and the rest is history. Eric Brown joined the Fleet Air Arm and went on to be the greatest test pilot in history, flying more different aircraft types than anyone else.

During his lifetime he made a record-breaking 2,407 aircraft carrier landings and survived eleven plane crashes. One of Britain's few German-speaking airmen, he went to Germany in 1945 to test the Nazi jets, interviewing (among others) Hermann Goering and Hanna Reitsch. He flew the suicidally dangerous Me 163 rocket plane, and tested the first British jets. WINGS ON MY SLEEVE is 'Winkle' Brown's incredible story.

Eric Brown is in the GUINNESS BOOK OF RECORDS for having flown more aircraft types (487) than any other pilot in history. His record is unlikely ever to be broken. Captain Brown CBE, DSC, AFC, KCVSA, RN, became a test pilot during the Second World War and commanded the RAE Aerodynamics Flight at Farnborough. He played a key role in the design of an entire generation of aircraft. No other man could have claimed to have interrogated several senior Nazis, flown their jet aircraft or tested so many experimental machines. The Royal Navy's most decorated pilot, Captain Eric Brown died in 2016 at the age of 97.
The greatest test pilot who ever lived. A true inspiration—Tim Peake

When you read through his life story, it makes James Bond seem like a bit of a slacker—Kirsty Young, DESERT ISLAND DISCS