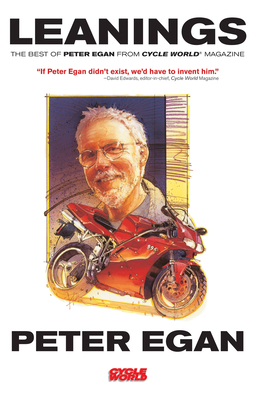 Since his work first graced the pages of Cycle World magazine in 1977, Peter Egan has taken his readers on one unforgettable adventure after another. Whether riding along the Mississippi River to New Orleans for a tin of chicory coffee, or flying to Japan to test-ride new Yamahas, Egan’s insight and gift with words makes every journey a unique and fascinating experience.

Available in paperback for the first time, Leanings is a collection of Egan’s favorite feature articles and columns from Cycle World magazine. Included among the 21 feature articles are Egan’s first feature for the magazine, a story about he and his wife’s cross-country trip on a British twin, his journey on abandoned Route 66, a history of the motorcycle jacket, and his visit to the fabled Tourist Trophy race on the Isle of Man. A selection of 27 columns are also reproduced here, covering a wide range of subjects, from the nearly lost art of the kick start, how to survive not being able to ride for an entire Wisconsin winter, and a look back at the motorcycle crash that nearly killed the great Bob Dylan. For added perspective, each feature article is preceded by commentary from the author. This is an unforgettable collection of the works of a master writer, whose simple adventures of life remind us all why we love to ride.

Peter Egan is one of the most readable writers in the motorcycle enthusiast world. His work first appeared in Cycle World magazine in 1977, and he has been a regular fixture there ever since. Peter lives near Madison, Wisconsin.