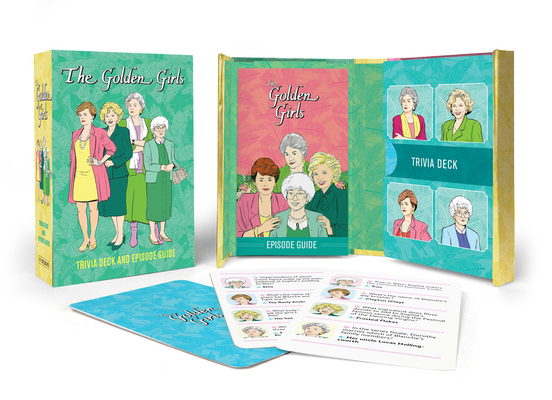 
Not On Our Shelves—Ships in 1-5 Days
From the hilarious characters to the most memorable moments, test your knowledge of The Golden Girls with this officially licensed episode guide and trivia set based on the beloved series.
First take a walk down memory lane with your favorite foursome as you brush up on your knowledge with the 96-page episode guide, including brief summaries of all 180 episodes.

Next gather your closest friends for a lightning round of trivia with a deck of 50 cards and 200 questions (50 per Golden Girl).

Store the episode guide and trivia deck together in the handsome magnetic closure box.

Christine Kopaczewski has had her work published by Good Housekeeping, Philadelphia magazine, Business Insider, PureWow, and Yahoo. She lives in Philadelphia with her husband and Scottish Terrier puppy.Disney Publishing Worldwide is one of the world's largest children's publishing brands, igniting imagination through storytelling in ever-inventive ways. As part of the Disney Parks, Experiences and Products segment, DPW brings the magic of The Walt Disney Company's powerful brands and franchises, including Disney, Pixar, Marvel, Star Wars, ESPN, 20th Century Studios, and National Geographic, to fans around the world.