Monster Kids: How Pokémon Taught a Generation to Catch Them All (Paperback) 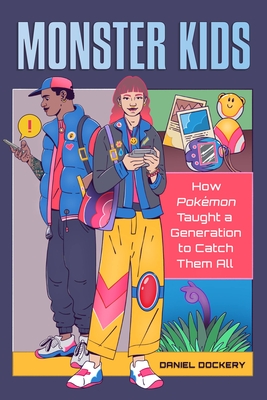 Monster Kids: How Pokémon Taught a Generation to Catch Them All (Paperback)

The definitive, behind-the-scenes look at why Pokémon's evolution from a single Japanese video game to global powerhouse captured the world's attention, and how the "gotta catch 'em all" mentality of its fanbase shaped pop culture—and continues to do so today.

More than just a simple journey through the history of Pokémon, Daniel Dockery offers an in-depth look at the franchise’s many branches of impact and influence. With dozens of firsthand interviews, Monster Kids covers its beginnings as a Japanese video game created to recapture one man's love of bug-collecting as a child before diving into the decisions and conditions that would ultimately lead to that game's global domination. With its continued growth as television shows, spin-off video games, blockbuster movies, trading cards, and toys, Pokémon is a unique and special brand that manages to continue to capture the attention and adoration of its eager fanbase 25 years after its initial release.

Whether it was new animated shows like Digimon, Cardcaptors, and Yu-Gi-Oh!; the rise of monster-catching video games and trading card games; and more, Pikachu, the king of pop culture in the '90s, opened the doors in America to those hoping to capture some of Pokémon's dedicated fans. In Monster Kids, Dockery combines the personal stories of the people who helped bring Pokémon to the global stage with affection and humor, making this book the ultimate look at the rise of the franchise in Japan and then North America, but also the generation of kids whose passion for "catching them all" created a unique cultural phenomenon that continues to make a profound impact today.
Daniel Dockery grew up with just a few TV channels and a dusty comic book rack at his local grocery store, but that’s probably why he finds pop culture to be so fascinating, an obsession that he’d turn into a career. He was a columnist and editor at Cracked.com for several years, a contributing writer for SYFY.com from 2018 to 2020, and currently serves as the Senior Staff Writer at Crunchyroll.com, where he continues to write about the things he loves on a near constant basis.