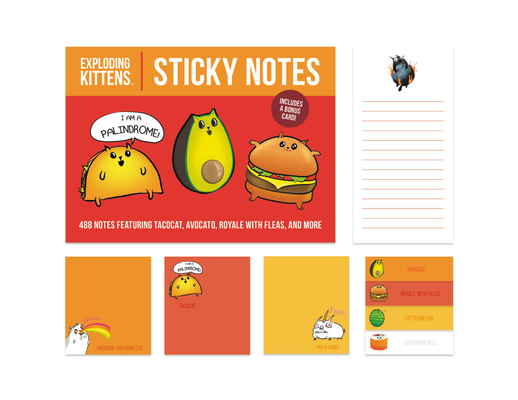 
Special Order—Subject to Availability
Level up your stationery game at home or the office with this handy set of sticky notes -- plus a bonus card! -- perfect for fans of the #1 bestselling card game, Exploding Kittens.

Now fans of Exploding Kittens have another way to enjoy their favorite card game -- with sticky notes! You can jot down quick reminders and lists or even use Tacocat or Avocato as a makeshift bookmark.
This deluxe set includes one list pad, three notepads, and four flag pads emblazoned with art from The Oatmeal, for a total of 488 stickies. Your to-do list just got a lot more exciting -- you're welcome.
In 2015, Exploding Kittens launched a Kickstarter campaign seeking $10,000 to create a card game. In thirty days, the game raised nearly $9M from 220,000 backers, becoming the most backed crowdfunding campaign in history. Exploding Kittens has been translated into more than twenty-four languages and has sold nearly 10M copies worldwide.