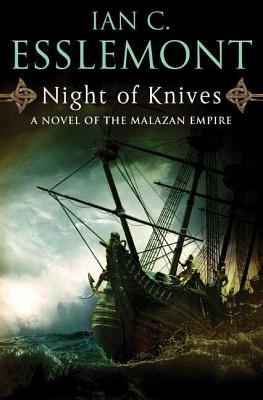 Drawing on events touched on in the prologue of Steven Erikson's landmark fantasy Gardens of the Moon, Night of Knives is a momentous chapter in the unfolding story of the extraordinarily imagined world of Malaz.

The small island of Malaz and its city gave the great empire its name, but now it is little more than a sleepy, backwater port. Tonight, however, things are different. Tonight the city is on edge, a hive of hurried, sometimes violent activity; its citizens bustle about, barring doors, shuttering windows, avoiding any stranger's stare. Because tonight there is to be a convergence, the once-in-a-generation appearance of a Shadow Moon – an occasion that threatens the good people of Malaz with demon hounds and other, darker things...

It was also prophesied that this night would witness the return of Emperor Kellanved, and there are those prepared to do anything to prevent this happening. As factions within the greater Empire draw up battle lines over the imperial throne, the Shadow Moon summons a far more ancient and potent presence for an all-out assault upon the island. Witnessing these cataclysmic events are Kiska, a young girl who yearns to flee the constraints of the city, and Temper, a grizzled, battle-weary veteran who seeks simply to escape his past. Each is to play a part in a conflict that will not only determine the fate of Malaz City, but also of the world beyond...

IAN C. ESSLEMONT grew up in Winnipeg, Manitoba. He has studied archaeology and creative writing, has traveled extensively in Southeast Asia, and lived in Thailand and Japan for several years. He lives in Alaska with his wife and children and writes novels set in the world of Malaz, a world he co-created with Steven Erikson, including Blood and Bone and Assail.

“Esslemont nails the feel and flavor of Erickson's books and brings the historical characters to life with a dexterity that will win over even the most skeptical fans.” —Publishers Weekly (Starred Review)

“Night of Knives marked the first installment of the shared world we had both envisioned.” —Steven Erikson