The Bonehunters: Book Six of The Malazan Book of the Fallen (Mass Market) 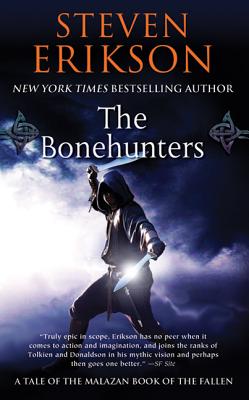 The Bonehunters: Book Six of The Malazan Book of the Fallen (Mass Market)

The Seven Cities Rebellion has been crushed. Sha'ik is dead. One last rebel force remains, holed up in the city of Y'Ghatan and under the fanatical command of Leoman of the Flails. The prospect of laying siege to this ancient fortress makes the battle-weary Malaz 14th Army uneasy. For it was here that the Empire's greatest champion Dassem Ultor was slain and a tide of Malazan blood spilled. A place of foreboding, its smell is of death.

But elsewhere, agents of a far greater conflict have made their opening moves. The Crippled God has been granted a place in the pantheon, a schism threatens and sides must be chosen. Whatever each god decides, the ground-rules have changed, irrevocably, terrifyingly and the first blood spilled will be in the mortal world.

A world in which a host of characters, familiar and new, including Heboric Ghost Hands, the possessed Apsalar, Cutter, once a thief now a killer, the warrior Karsa Orlong and the two ancient wanderers Icarium and Mappo--each searching for such a fate as they might fashion with their own hands, guided by their own will. If only the gods would leave them alone. But now that knives have been unsheathed, the gods are disinclined to be kind. There shall be war, war in the heavens. And, the prize? Nothing less than existence itself...

Here is the stunning new chapter in Steven Erikson's magnificent Malazan Book of the Fallen--hailed as an epic of the imagination and acknowledged as a fantasy classic in the making.

“Truly epic in scope., Erikson has no peer when it comes to action and imagination, and joins the ranks of Tolkien and Donaldson in his mythic vision and perhaps then goes one better.” —SF Site

“Rare is the writer who so fluidly combines a sense of mythic power and depth of world with fully realized characters and thrilling action, but Steven Erikson manages it spectacularly.” —Michael A. Stackpole