Skullsworn: A Novel in the World of The Emperor's Blades (Chronicle of the Unhewn Throne) (Paperback) 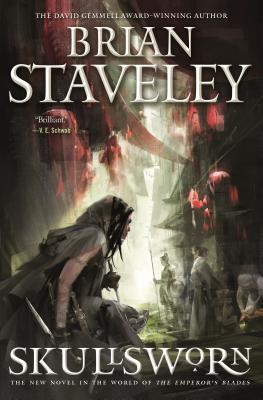 Skullsworn: A Novel in the World of The Emperor's Blades (Chronicle of the Unhewn Throne) (Paperback)

Brian Staveley’s new standalone, Skullsworn, returns to the critically acclaimed Chronicle of the Unhewn Throne universe, following a priestess attempting to join the ranks of the God of Death.


Pyrre Lakatur is not, to her mind, an assassin, not a murderer—she is a priestess. At least, she will be once she passes her final trial.

The problem isn’t the killing. The problem, rather, is love. To complete her trial, Pyrre has ten days to kill the seven people enumerated in an ancient song, including “the one who made your mind and body sing with love / who will not come again.”

Pyrre isn’t sure she’s ever been in love. And if she fails to find someone who can draw such passion from her, or fails to kill that someone, her order will give her to their god, the God of Death. Pyrre’s not afraid to die, but she hates to fail, and so, as her trial is set to begin, she returns to the city of her birth in the hope of finding love . . . and ending it on the edge of her sword.

BRIAN STAVELEY has taught literature, religion, history, and philosophy, and holds an MA in poetry from Boston University. His books, which have been translated into over a dozen languages, include The Empire's Ruin, The Emperor's Blades, The Providence of Fire, The Last Mortal Bond, and Skullsworn. He lives in Vermont and divides his time between running trails, splitting wood, writing, and chasing his son downhill on a mountain bike.

“Staveley has quickly become one of my favorite fantasy authors, and his latest doesn't disappoint. Skullsworn is a brilliant new chapter in a fabulous series." —V. E. Schwab, New York Times bestselling author

“A warm, funny, character-focused novel which is also darkly charming, bloody, and lethal. It was very, very hard to put down, and had an emotional punch to match its high adrenaline moments.” —Sci Fi and Fantasy Reviews

“A stunning prequel that actually lives up to the original trilogy's legacy […] Staveley has proven himself to be a master of world-building, character development, and sheer storytelling.” —Beauty in Ruins

“Full of surprises […} more inventive and grisly than I could have imagined.” —Fantasy Faction, 9/10 stars

“A fantastic standalone book with a very satisfying conclusion – well thought out and written incredibly well.” —The Bookbag


Praise for Brian Staveley and the Chronicles of the Unhewn Throne

“Darker and fiercer than the other two books […] the way Staveley crafts the ending, bringing everything together, is just masterful.” —Speculative Herald on The Last Mortal Bond

“The Chronicle of the Unhewn Throne is a trilogy that’s gone from strength to strength as it’s gone on—that’s gotten not just bigger but measurably better with every increasingly vital volume—and it’s my pleasure to tell you that The Last Mortal Bond is, without question, Staveley’s most impressive and immersive effort yet […] What I didn’t expect was that it would take my breath away. But it did.”—Tor.com

“Staveley shows how to end a fantasy epic with The Last Mortal Bond.”—io9

“One of the most brutal, gut-wrenching, raw, emotional, masterfully told, brilliantly plotted, beautifully written series I have ever had the pleasure of reading.”—The Book Eaters on The Last Mortal Bond

“A phenomenon like the Chronicle of the Unhewn Throne comes along once in a lifetime.”—The Qwillery

“Epic does not even begin to describe this dramatic third and final installment in the Chronicle of the Unhewn Throne.”—Bibliosanctum

“The perfect ending to a fantastic trilogy.”—Beauty in Ruins on The Last Mortal Bond