Buddhist Scriptures as Literature: Sacred Rhetoric and the Uses of Theory (Paperback) 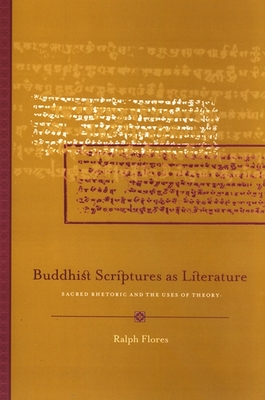 Buddhist Scriptures as Literature: Sacred Rhetoric and the Uses of Theory (Paperback)


Special Order—Subject to Availability
Buddhist Scriptures as Literature explores the drama, lyricism, and compelling storylines in Buddhist sacred writings, while illustrating how rhetoric and ideology are at work in shaping readers' reactions. Ralph Flores argues that the Buddha's life story itself follows an archetypal quest-romance pattern: regal surroundings are abandoned and the ensuing feats are heroic. The story can be read as an epic, but it also has a comic plot: confusions and trials until the Prince becomes utterly selfless, having found his true element--nirvana. Making use of contemporary literary theory, Flores offers new readings of texts such as the Nikāyas, the Dhammapada, the Heart Sutra, Zen koans, Shantideva's Way of the Bodhisattva, and the Tibetan Book of the Dead. Understanding these works as literature deepens our sense of the unfolding of their teachings, of their exuberant histories, and of their relevance for contemporary life.
Ralph Flores teaches literature at Thammasat University in Thailand and is the author of A Study of Allegory in Its Historical Context and Relationship to Contemporary Theory.