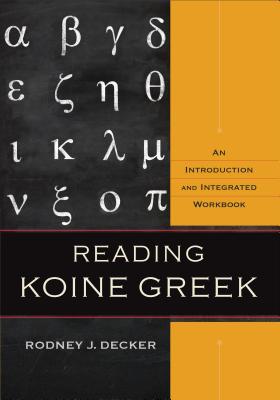 
Not On Our Shelves—Ships in 1-5 Days
This in-depth yet student-friendly introduction to Koine Greek provides a full grounding in Greek grammar, while starting to build skill in the use of exegetical tools. The approach, informed by twenty-five years of classroom teaching, emphasizes reading Greek for comprehension as opposed to merely translating it. The workbook is integrated into the textbook, with exercises appearing within each chapter rather than pushed to the end or located in a separate book. This enables students to practice concepts as they encounter them in the chapter--ideal for distance learning or studying beyond the traditional classroom. The book covers not only New Testament Greek but also the wider range of Bible-related Greek (LXX and other Koine texts). It introduces students to reference tools for biblical Greek, includes tips on learning, and is supplemented by robust web-based resources through Baker Academic's Textbook eSources. Resources for students include flash cards and audio files. Resources for professors include a test bank and an instructor's manual.
Rodney J. Decker (1953-2014) received his ThD from Central Baptist Theological Seminary and served as professor of Greek and New Testament at Baptist Bible Seminary in Pennsylvania. He authored "Temporal Deixis of the Greek Verb in the Gospel of Mark with Reference to Verbal Aspect "and several major Greek study books, including "A Koine Greek Reader" and the forthcoming Mark volumes in the Baylor Handbook on the Greek New Testament.