3.11: Disaster and Change in Japan (Hardcover) 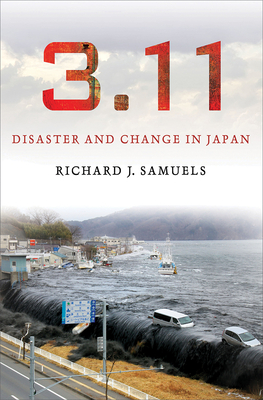 3.11: Disaster and Change in Japan (Hardcover)

On March 11, 2011, Japan was struck by the shockwaves of a 9.0 magnitude undersea earthquake originating less than 50 miles off its eastern coastline. The most powerful earthquake to have hit Japan in recorded history, it produced a devastating tsunami with waves reaching heights of over 130 feet that in turn caused an unprecedented multireactor meltdown at Fukushima Daiichi Nuclear Power Plant. This triple catastrophe claimed almost 20,000 lives, destroyed whole towns, and will ultimately cost hundreds of billions of dollars for reconstruction.In 3.11, Richard Samuels offers the first broad scholarly assessment of the disaster's impact on Japan's government and society. The events of March 2011 occurred after two decades of social and economic malaise--as well as considerable political and administrative dysfunction at both the national and local levels--and resulted in national soul-searching. Political reformers saw in the tragedy cause for hope: an opportunity for Japan to remake itself. Samuels explores Japan's post-earthquake actions in three key sectors: national security, energy policy, and local governance. For some reformers, 3.11 was a warning for Japan to overhaul its priorities and political processes. For others, it was a once-in-a-millennium event; they cautioned that while national policy could be improved, dramatic changes would be counterproductive. Still others declared that the catastrophe demonstrated the need to return to an idealized past and rebuild what has been lost to modernity and globalization.Samuels chronicles the battles among these perspectives and analyzes various attempts to mobilize popular support by political entrepreneurs who repeatedly invoked three powerfully affective themes: leadership, community, and vulnerability. Assessing reformers' successes and failures as they used the catastrophe to push their particular agendas--and by examining the earthquake and its aftermath alongside prior disasters in Japan, China, and the United States--Samuels outlines Japan's rhetoric of crisis and shows how it has come to define post-3.11 politics and public policy.

Richard J. Samuels is Ford International Professor of Political Science and Director of the Center for International Studies at the Massachusetts Institute of Technology. He is the author of several award-winning books, including Securing Japan: Tokyo's Grand Strategy and the Future of East Asia; Machiavelli's Children: Leaders and Their Legacies in Italy and Japan; Rich Nation, Strong Army: National Security and the Technological Transformation of Japan; and The Business of the Japanese State, also from Cornell.