A Question of Belief: A Commissario Guido Brunetti Mystery (Paperback) 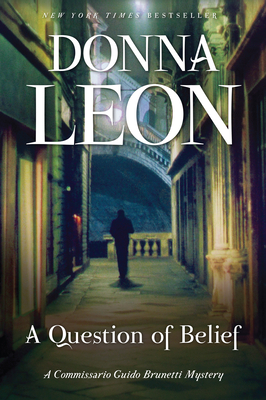 A Question of Belief: A Commissario Guido Brunetti Mystery (Paperback)

This is book number 19 in the Commissario Guido Brunetti Mystery series.

Donna Leon's bestselling series featuring the principled, warmhearted Venetian Commissario Guido Brunetti has won her countless fans, critical acclaim, and international renown as one of the world's best crime writers. In A Question of Belief, Brunetti must contend with ingenious corruption, bureaucratic intransi-gence, and the stifling heat of a Venetian summer. With his hometown beset by hordes of tourists and baking under a glaring sun, Brunetti's greatest wish is to go to the mountains with his family, where he can sleep under a down comforter and catch up on his reading. But before he can go on vacation, a folder with court records has landed on his desk, brought by an old friend. It appears that cases at the local court--hardly known as a model of efficiency--are being delayed to the benefit of one of the parties, a creative new trick for corrupting the system. And just when it looks like Brunetti will be able to get away, a shocking, violent crime forces him to stay in Venice. A Question of Belief is a stellar addition to Leon's celebrated series.
Donna Leon, born in New Jersey in 1942, has worked as a travel guide in Rome and as a copywriter in London. She taught literature in universities in Iran, China, and Saudi Arabia. Commissario Brunetti made her books world-famous. Donna Leon lived in Italy for many years, and although she now lives in Switzerland, she often visits Venice.