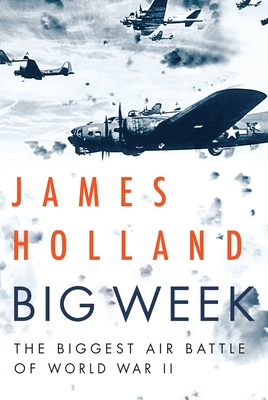 During the third week of February 1944, the combined Allied air forces based in Britain and Italy launched their first round-the-clock bomber offensive against Germany. Their goal: to smash the main factories and production centers of the Luftwaffe while also drawing German planes into an aerial battle of attrition to neutralize the Luftwaffe as a fighting force prior to the cross-channel invasion, planned for a few months later. Officially called Operation ARGUMENT, this aerial offensive quickly became known as "Big Week," and it was one of the turning-point engagements of World War II.

In Big Week, acclaimed World War II historian James Holland chronicles the massive air battle through the experiences of those who lived and died during it. Prior to Big Week, the air forces on both sides were in crisis. Allied raids into Germany were being decimated, but German resources--fuel and pilots--were strained to the breaking point. Ultimately new Allied aircraft--especially the American long-range P-51 Mustang--and superior tactics won out during Big Week. Through interviews, oral histories, diaries, and official records, Holland follows the fortunes of pilots, crew, and civilians on both sides, taking readers from command headquarters to fighter cockpits to anti-aircraft positions and civilian chaos on the ground, vividly recreating the campaign as it was conceived and unfolded. In the end, the six days of intense air battles largely cleared the skies of enemy aircraft when the invasion took place on June 6, 1944--D-Day.

Big Week is both an original contribution to WWII literature and a brilliant piece of narrative history, recapturing a largely forgotten campaign that was one of the most critically important periods of the entire war.

James Holland is a historian, writer, and broadcaster. The author of The Rise of Germany, 1939-1941 and The Allies Strike Back, 1941-1943, the first two books in The War in the West series, as well as the bestselling Fortress Malta, Battle of Britain, and Dam Busters, he has also written numerous works of historical fiction. Holland regularly appears on television and radio and has written and presented the BAFTA-shortlisted documentaries Battle of Britain and Dam Busters for the BBC, among others. His writing has appeared in magazines and newspapers including the Sunday Telegraph, for whom he went to Helmand Province in Afghanistan, the Times, Daily Mail, and BBC History Magazine. A fellow of the Royal Historical Society, and cofounder and program director of the hugely successful Chalke Valley History Festival, Holland has also advised the British government on history curriculum and has his own collection at the Imperial War Museum.