The Faith of Jesus Christ: The Narrative Substructure of Galatians 3:1-4:11 (Biblical Resource #56) (Paperback) 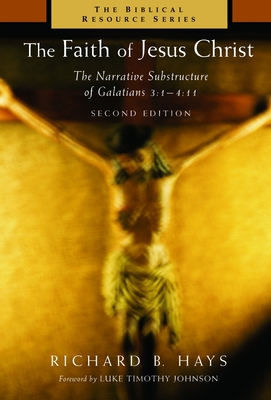 The Faith of Jesus Christ: The Narrative Substructure of Galatians 3:1-4:11 (Biblical Resource #56) (Paperback)

By Richard B. Hays, Luke Timothy Johnson (Foreword by)


Not On Our Shelves—Ships in 1-5 Days
(This book cannot be returned.)
Widely praised as a major contribution to Pauline studies, Richard B. Hays's Faith of Jesus Christ now features, in this expanded second edition, a foreword by Luke Timothy Johnson, a new introduction by Hays, and a substantial dialogue with James D. G. Dunn. In this important study Hays argues against the mainstream that any attempt to account for the nature and method of Paul's theological language must first reckon with the centrality of narrative elements in his thought. Through an in-depth investigation of Galatians 3:1-4:11, Hays shows that the framework of Paul's thought is neither a system of doctrines nor his personal religious experience but the "sacred story" of Jesus Christ. Above all, Paul's thought is guided by his concern to draw out the implications of the gospel story, particularly how the "faith of Jesus Christ" reflects the mission of the church.
Richard B. Hays is George Washington Ivey Professor Emeritus of New Testament and former dean at Duke Divinity School. He is internationally recognized for his work on the letters of Paul and New Testament ethics. His book The Moral Vision of the New Testament was selected by Christianity Today as one of the 100 most important religious books of the twentieth century.