A Greek Reader: Companion to a Primer of Biblical Greek (Hardcover) 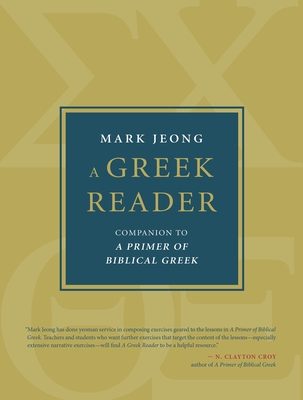 A Greek Reader: Companion to a Primer of Biblical Greek (Hardcover)

A companion resource for use with N. Clayton Croy's Primer of Biblical Greek, featuring dozens of simple, enjoyable narratives to reinforce the content and skills introduced by Croy.

Too often, Greek readers include difficult primary texts encumbered with glosses, but this reader from Mark Jeong is instead comprised of originally written texts keyed to the vocabulary and grammar taught in Clayton Croy's Primer of Biblical Greek. Thus fluent, comprehensive reading--rather than painstaking translation--can be the goal.

In addition to providing useful practice, Jeong's engaging narratives will help students of Greek grasp the nuances of particularly complicated aspects of Koine--such as the imperfect tense--by allowing them to see the language "in action" in various textual situations. Each narrative also follows a larger story about the adventures of Philemon, Onesimus, and Paul, making for enjoyable reading that better prepares one for the daunting task of eventually reading the Greek New Testament.