Sometimes They Even Shook Your Hand: Portraits of Champions Who Walked Among Us (Paperback) 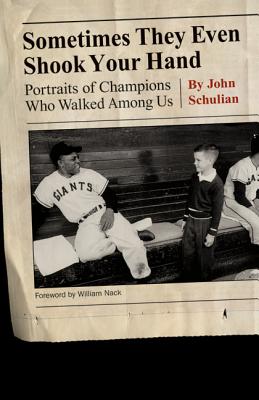 Sometimes They Even Shook Your Hand: Portraits of Champions Who Walked Among Us (Paperback)


Not On Our Shelves—Ships in 1-5 Days
John Schulian, a much-honored sportswriter for nearly forty years, takes us back to a time when our greatest athletes stood before us as human beings, not remote gods. In this compelling collection, Schulian paints prose portraits to remind fans of what today’s cloistered stars won’t share with them.   Here, Willie Mays remembers how to smile in dreaded retirement; Muhammad Ali muses about a world that was once his. For every moment of triumph—Joe Montana in the Super Bowl, Marvelous Marvin Hagler over Thomas Hearns—there is another filled with the heartache that Pete Maravich felt when he hung up his basketball shoes.   The result is a book guaranteed to stir memories for the generation that was—and to leave subsequent generations wishing they had it so good.
Purchase the audio edition.
John Schulian’s work has been included in Best American Sports Writing and Sports Illustrated’s Fifty Years of Great Writing. His many books include The John Lardner Reader and Twilight of the Long-Ball Gods: Dispatches from the Disappearing Heart of Baseball, both available in Bison Books editions. William Nack is the author of Secretariat: The Making of a Champion and Ruffian: A Racetrack Romance.
"These pieces, and Schulian's longer profiles written for other publications around that time—such as a fine portrait of the cerebral but hard-hitting Bears safety Gary Fencik, for GQ—have traveled well and together capture an era ever worth remembering."—Alan Moores, Booklist

"If today's center fielders and point guards seem like lesser figures than men like Maravich and Charleston, that's primarily because they are so much more heavily covered but also because so much of that coverage is needlessly cruel. Without falsely inflating them or hiding their weaknesses, Mr. Schulian made one generation of athletes worthy subjects of wonder. Had Hollywood not called, you suspect, he'd have done the same for another."—Tim Marchman, Wall Street Journal

"Whether discoursing on boxing, horse racing, tennis players or Olympic swimmers, John Schulian delivers tales replete with the elements that make fiction come alive. Readers of a certain age will experience a walk down memory lane and others will have the pleasure of meeting some of the greatest, most interesting and human sports figures they have never heard of."—Phyllis Hanlon, New York Journal of Books

"Like a pinch hitter who steps to the plate at a crucial point in the game, John Schulian rises magnificently to the occasion. . . . These essays are pungent and heartfelt and knowing. They come at you straight and strong."—Julia Keller, Chicago Tribune

"Whichever way you take the title, the book is full of fine writing. Schulian deserves to be mentioned in the same breath as some of his heroes, including the aforementioned Smith and Heinz. Thanks to University of Nebraska Press for collecting this work."—NPR's Only a Game

"Looking back through the years in sports reveals much about the culture and society in which we live. It's hard to imagine Babe Ruth getting away with his trysts in a TMZ society. Or Wilt Chamberlain saying whatever comes into his head on Twitter. This is why John Schulian's recent book, Sometimes They Even Shook Your Hand, is an intriguing look back at a time when athletes behaved a lot differently with their fan base."—Krystina Lucido, PressBox