The Nile: Travelling Downriver Through Egypt's Past and Present (Vintage Departures) (Paperback) 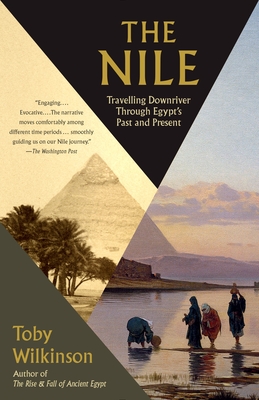 The Nile: Travelling Downriver Through Egypt's Past and Present (Vintage Departures) (Paperback)


Special Order—Subject to Availability
The Nile, like all of Egypt, is both timeless and ever-changing. In these pages, renowned Egyptologist Toby Wilkinson takes us on a journey downriver that is both history and travelogue. We begin at the First Nile Cataract, close to the modern city of Aswan. From there, Wilkinson guides us through the illustrious nation birthed by this great river.
We see Thebes, with its Valley of the Kings, Valley of the Queens, and Luxor Temple. We visit the fertile Fayum, the Great Pyramid of Giza, and finally, the pulsing city of Cairo, where the Arab Spring erupted on the bridges over the water. Along the way, Wilkinson introduces us to the gods, pharaohs, and emperors who joined their fate to the Nile and gained immortality; and to the adventurers, archaeologists, and historians who have all fallen under its spell. Peerlessly erudite, vividly told, The Nile brings the course of this enduring river into stunning view.

Toby Wilkinson earned a degree in Egyptology from the University of Cambridge, and is the recipient of several prestigious awards given in his field. He has published nine books, and received the Hessell-Tiltman Prize for his previous book, The Rise and Fall of Ancient Egypt. He has appeared on radio and television as an expert on ancient Egyptian civilization and is a member of the international editorial board of the Journal of Egyptian History. Since 2003, he has been a Fellow at Clare College, University of Cambridge. He lives in Suffolk, England.

“Engaging. . . . Evocative. . . . The narrative moves comfortably among different time periods . . . smoothly guiding us on our Nile journey.” —The Washington Post

“Fascinating. . . . Compelling. . . . The Nile emerges as potent as ever, the sole bringer of life to Egypt.” —The Guardian (London)

“First-rate. . . . The Nile and the history it has engendered still manage to stir something in all of us.” —The Daily Beast

“Tell[s] the entire layered story of Egyptian civilization. Wilkinson deftly mingles ancient lore from the Pharaonic past with tales of 19th-century tomb robbers and contemporary clashes between the competing imperatives to develop and preserve sites along the riverbanks.” —The Christian Science Monitor

“Dexterously done and rich in detail. . . .  This is infectious stuff that should surely inspire its readers to a fresh bout of Egyptian adventures.” —The Telegraph (London)

“In this felucca voyage of the Nile, you see all of its history and you are constantly reminded that Egypt is also a living nation of today. . . . [Wilkinson] has done for popularizing this land what Michio Kaku and DeGrasse Tyson have done for astronomy and physics.” —The New York Journal of Books

“[A] gently meandering tour of the Nile River in the company of a deeply knowledgeable guide. . . . To understand the cataclysmic changes gripping Egypt at the moment, eminent British Egyptologist Wilkinson urges a return to the heart of the country, the Nile, the source of the country’s economy, spiritual beliefs and political structure.” —Kirkus Reviews