The Children Return: A Mystery of the French Countryside (Bruno, Chief of Police Series #7) (Paperback) 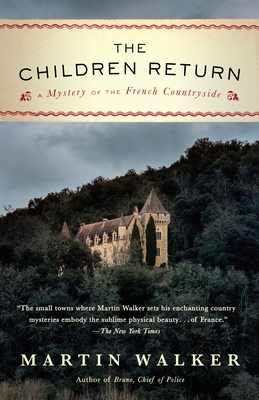 The Children Return: A Mystery of the French Countryside (Bruno, Chief of Police Series #7) (Paperback)

This is book number 7 in the Bruno, Chief of Police Series series.

With clever twists and action aplenty, this installment in the delightful, internationally acclaimed series featuring Chief of Police Bruno is a journey to St. Denis that readers won't soon forget.

Bruno’s village of St. Denis has been called many things, but a hotbed of international intrigue has never been one of them ...  until now. When an undercover agent is found murdered just as a prodigal son is set to retun from a grim tour in the Middle East, the small town suddenly finds itself host to a determined global tribunal, threatening the usual cheer brought by St. Denis’s annual wine festival.
MARTIN WALKER is a senior fellow of the Global Business Policy Council, a private think tank for CEOs of major corporations, based in Washington, D.C. He is also editor in chief emeritus and international affairs columnist at United Press International. His six previous novels in the Bruno series are Black Diamond; Bruno, Chief of Police; The Crowded Grave; The Dark Vineyard; The Devil’s Cave; and The Resistance Man, all international best sellers. He lives in Washington, D.C., and the Dordogne.
"The small towns where Martin Walker sets his enchanting country mysteries embody the sublime physical beauty...of France." —The New York Times

“Nicely crafted with sensitivity and humor, The Children Return is tailor-made for fans of Peter Mayle, Colin Cotterill and Alexander McCall Smith." —BookPage

“Bruno Courrèges may be France’s...answer to dapper James Bond.”—Minneapolis Star-Tribune

“[Walker’s] juxtaposition of the serene and the darker arts reminds us not to forget to smell the roses.”—The Post and Courier (Charleston, SC)

“A solid mystery, with the ever-fascinating character of Bruno at the helm.” —Booklist

“A cozy village mystery needn’t be quaint, and in his blissful novels about Bruno Courrèges... Martin Walker...manages to balance the idyllic charms of his fictional village with substantive issues of concern to Bruno’s neighbors.”—The New York Times Book Review

“In Martin Walker’s delightful series...the charm of rural France is regularly disrupted—but not too much.” —The Seattle Times

“In an era when most Americans are ignorant of France in its true richness, generosity of spirit, and quality of life, Mr. Walker and his Bruno offer an enchanting introduction into this very real world.” —The Washington Times

“Sure to appeal to readers with a palate for mysteries with social nuance and understated charm.” —The Wall Street Journal