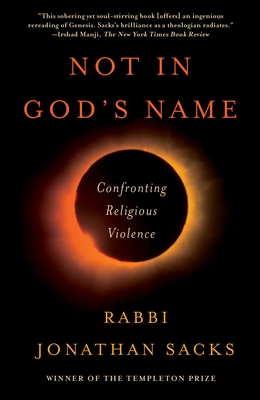 
Special Order—Subject to Availability
In this powerful and timely book, one of the most admired and authoritative religious leaders of our time tackles the phenomenon of religious extremism and violence committed in the name of God. If religion is perceived as being part of the problem, Rabbi Sacks argues, then it must also form part of the solution. When religion becomes a zero-sum conceit—i.e., my religion is the only right path to God, therefore your religion is by definition wrong—and when individuals are motivated by what Rabbi Sacks calls “altruistic evil,” violence between peoples of different beliefs appears to be the inevitable outcome. But through an exploration of the roots of violence and its relationship to religion, and employing groundbreaking biblical analysis and interpretation, Rabbi Sacks shows that religiously inspired violence has as its source misreadings of biblical texts at the heart of all three Abrahamic faiths. By looking anew at the book of Genesis, with its foundational stories of Judaism, Christianity, and Islam, Rabbi Sacks offers a radical rereading of many of the Bible’s seminal stories of sibling rivalry: Cain and Abel, Isaac and Ishmael, Jacob and Esau, Joseph and his brothers, Rachel and Leah.

Here is an eloquent call for people of goodwill from all faiths and none to stand together, confront the religious extremism that threatens to destroy us all, and declare: Not in God’s Name.
RABBI LORD JONATHAN SACKS is the award-winning author of more than thirty books. He is a frequent and respected contributor to radio, television, and the press around the world and teaches at universities in Britain, the United States, and Israel. Rabbi Sacks holds sixteen honorary degrees and has received many awards in recognition of his work, including the Jerusalem Prize and, in 2016, the Templeton Prize. He served as Chief Rabbi of the United Hebrew Congregations of the Commonwealth from 1991 to 2013.
A Sunday Times (London) Bestseller

"An urgent and authoritative exploration of the roots of religious violence, from one of the world's great contemporary theologians. From Sacks's first gut-wrenching sentence, the reader has a solid sense that what follows are the deeply thought, carefully weighed words of an impeccable scholar. His reading of the Hebrew Bible is astute, illuminating layers of meaning too often missed. Sacks is a clear-eyed and compelling illuminator, and his methodical deconstruction, which routs out flawed understandings of the Bible, drives us emphatically toward hope, toward a theology that lets go of hate."
—Barbara Mahany, Chicago Tribune

“In his remarkable book, Sacks argues that believers must face the painful facts. He is careful to document that wars of religion are not unique to Islam. He believes that to persuade religious people of the Abrahamic faiths, arguments against religious violence must be rooted in theology, not in secular ideas alone.”
—E. J. Dionne Jr. The Washington Post

“The heart of Sacks’s powerful argument is a compelling exposition of Genesis [that] suggests an astonishing rereading of the narrative. . . . The book is a wondrous and valuable probe of our current world of violence that invites us to rethink and rehear the founding texts that are invoked to fund crusades. . . . It points authoritatively toward an alternative practice of public life grounded in a common humanity that subverts all tribal temptations. . . . Wise and important.”
—Walter Brueggemann, The Christian Century

“Not in God’s Name is a really important book that I urge you to buy and read. . . . [It] is terrific.”
—Fareed Zakaria GPS, CNN

“In Not in God’s Name, the brilliant Rabbi Jonathan Sacks argues that ISIS is in fact typical of what we will see in the decades ahead. . . . [His] greatest contribution is to point out that the answer to religious violence is probably going to be found within religion itself.”
—David Brooks, The New York Times

“Sacks’s analysis reflects an erudite mind fully engaged with philosophy, politics, and social studies of the most rigorous kind. It is when he turns his attention and all these resources to a theological engagement with the connection between religious faith and violence that he makes his greatest contribution . . . I cannot think of a more important new book for people of faith to read and study together . . . Jonathan Sacks is an enlightening presence for the whole world, and his message resonates today more powerfully than ever.”
—Michael Jinkins (president, Louisville Presbyterian Theological Seminary), Huffington Post

“An intelligent analysis of old and new connections between religion and violence . . . Sacks tackles this task with the tenderness of a believer and the rigor of a scholar, drawing both on a thorough knowledge of ancient texts and history, and on modern insights such as those of Freud and the French literary critic and authority on sacred violence, Rene Girard.”
—The Economist

“This is a courageous and imaginative book.”
—Martha Minow (dean, Harvard Law School), The New Rambler

“Sacks believes that Islamic violence, like Jewish and Christian violence, flows from a misunderstanding of sacred text. In Not in God’s Name he illuminates a wiser faith and a gentler God. It’s a perceptive, poignant, and beautifully written book.”
—William Saletan, The Wall Street Journal

“A remarkable exploration of the reasons behind religious violence and solutions for stopping it, [through a] fascinating and ingenious reinterpretation of the book of Genesis. . . . Sacks’s treatment of Scripture is alone worth a close read. A humane, literate, and sincere book, one with something truly new to say.”
—Kirkus Reviews (starred review)

“Inspired by Isaiah’s vision of nations beating their swords into plowshares, Sacks embraces religion as the pathway to peace. . . . He unfolds a genuinely inclusive and pacific Abrahamic faith by burrowing into the Hebrew Bible . . . discerning deep themes conducing both to a universal justice between all peoples and a profound sense of God’s particularizing love for diverse covenant communities. A much-needed antidote to lethal animosities.”
—Booklist (starred review)

“Sacks turns his prodigious intellect to deconstructing the mechanisms of religious violence. . . . He displays his wide learning and empathy in service of an ambitious, ingenious worldview. We’d all be wise to listen.”
—Publishers Weekly

“Rabbi Sacks is one of today’s most interesting thinkers, writers, and speakers. His interventions into the public debate rarely fail to encourage thought, knowledge, and, indeed, wisdom. I suspect that this latest book will contribute a significant amount to the ferocious debates around religion and violence in our world today.”
—The Spectator (London)

“Sacks can’t be accused of shirking the big issues. In Not in God’s Name he considers a subject that believers of all faiths have a huge difficulty explaining: Why do so many insist on advancing their belief in God as a justification for violence? It is, as the briefest survey of the headlines will confirm, a timely inquiry. Sacks, unsurprisingly, rejects the suggestion that religion itself is what causes the problem, though he does believe that if it is to be solved, theology must play a part.”
—The Guardian (London)

“A global campaigner for greater religious understanding between all the faiths . . . Sacks is unmistakably a man on a mission, and he is sure that there is plenty we can do, if we find the will . . . His book is one front in that battle.”
—The Telegraph  (London)

“The book makes interesting and valuable points . . . Sacks reminds us that it is wrong to casually conflate ‘orthodox’ believers with armchair fundamentalists. The two approaches to faith are not only different but opposed to one another, he says. It is a case well put, and worth hearing.”
—The Independent (London)

“Not in God’s Name makes an explicit link between [religious] extremism and the growing gulf between a secular West and a religious world . . . It is a persuasive analysis.”
—BBC News