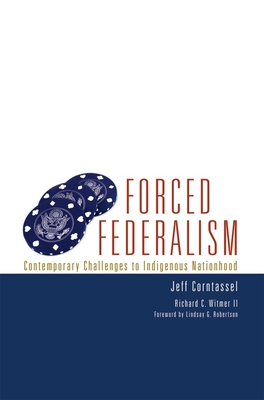 
Not On Our Shelves—Ships in 1-5 Days
VOLUME 3 IN THE AMERICAN INDIAN AND POLICY SERIES A critical evaluation of a new era in American Indian policy Over the past twenty years, American Indian policy has shifted from self-determination to "forced federalism," as indigenous nations in the United States have encountered new threats from state and local governments over such issues as taxation, gaming, and homeland security. During the forced federalism era (1988-present), public perceptions of indigenous peoples as "rich Indians" have been just as damaging to Native nations as anti-sovereignty legislation. This book examines how state governments have manipulated "rich Indian" images when setting policies targeting indigenous peoples and discusses how indigenous nations have responded politically to these contemporary threats to their nationhood. Drawing on original survey data collected from Native governments from 1994 to 2000 and on interviews with Chief Chad Smith of the Cherokee Nation as well as other indigenous leaders, Jeff Corntassel and Richard C. Witmer II examine the power dynamics of the indigenous-state compacting system, and show how electoral activism among indigenous peoples has increased their political power while also giving rise to "rich Indian racism" among non-Indians-especially in the wake of the Indian Gaming and Regulatory Act. The authors warn that current widespread Native participation in non-Native politics is undermining both the political and the cultural foundations of indigenous nationhood, especially as the American culture of money gains influence in Native politics. They also offer specific strategies for regenerating indigenous communities in order to meet future challenges to their nationhood. Jeff Corntassel is Assistant Professor and Graduate Advisor for the Indigenous Governance Programs at the University of Victoria, British Columbia. Richard C. Witmer II is Assistant Professor of Political Science, Creighton University, Omaha, Nebraska. Lindsay G. Robertson, Orpha and Maurice Merrill Professor of Law and Faculty Director of the American Indian Law and Policy Center at the University of Oklahoma, is author of Conquest by Law: How the Discovery of America Dispossessed Indigenous Peoples of Their Lands.