Buying America from the Indians: Johnson v. McIntosh and the History of Native Land Rights (Hardcover) 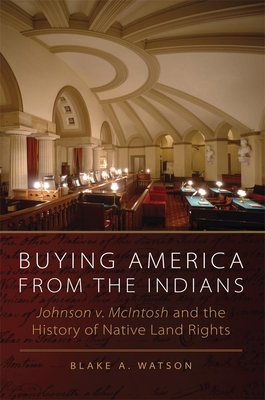 Buying America from the Indians: Johnson v. McIntosh and the History of Native Land Rights (Hardcover)

By Blake A. Watson


Not On Our Shelves—Ships in 1-5 Days
The U.S. Supreme Court ruling in Johnson v. McIntosh established the basic principles that govern American Indian property rights to this day. In the case, more than one Anglo-American purchaser claimed title to the same land in what is now southern Illinois. The Piankeshaw Indians had deeded the land twice--once to speculators in 1775, and again, thirty years later, to the United States by treaty. The Court decided in favor of William McIntosh, who had bought the land from the U.S. government. Writing for the majority, Chief Justice John Marshall declared that the "discovery" of America had given "exclusive title to those who made it"--namely, the European colonizers. According to Johnson, the Piankeshaws did not own what they thought was their land. Indeed, no Indian tribe did. Buying America from the Indians offers a comprehensive historical and legal overview of Native land rights since the European "discovery" of the New World. Watson sets the case in rich historical context. After tracing Anglo-American views of Native land rights to their European roots, Blake A. Watson explains how speculative ventures in Native lands affected not only Indian peoples themselves but the causes and outcomes of the French and Indian War, the American Revolution, and ratification of the Articles of Confederation. He then focuses on the transactions at issue in Johnson between the Illinois and Piankeshaw Indians, who sold their homelands, and the future shareholders of the United Illinois and Wabash Land Companies. The final chapters highlight the historical legacy of Johnson v. McIntosh on federal policy with regard to Indian lands. Taught to first-year law students as the root of title for real property in the United States, the case has also been condemned by the United Nations and others as a Eurocentric justification for the subjugation of North American indigenous peoples. Watson argues that the United States should formally repudiate the discovery doctrine set forth in Johnson v. McIntosh. The thorough backstory andanalysis in this book will deepen our understanding of one of the most important cases in both federal Indian law and American property law.