The Psychedelic Experience: A Manual Based on the Tibetan Book of the Dead (Paperback) 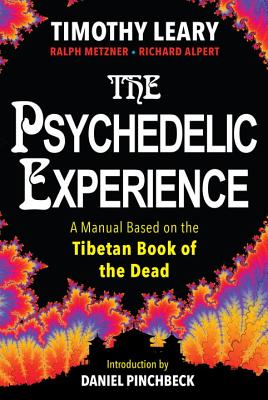 The Psychedelic Experience: A Manual Based on the Tibetan Book of the Dead (Paperback)


Special Order—Subject to Availability
Created by the prophetic shaman-professors Timothy Leary, Ralph Metzner, and Richard Alpert (Ram Dass), this foundational text serves as a model and a guide for all mind-expanding inquiries. Based on a unique interpretation of The Tibetan Book of the Dead, The Psychedelic Experience remains a vital testament to broadening spiritual consciousness through a combination of Tibetan meditation techniques and psychotropic substances.

More than fifty years after the Summer of Love, the promise of the psychoactive ’60s—that deeper self-awareness and greater harmony can be achieved through reality-bending substances and practices—is close to becoming a mainstream phenomenon. The signs are everywhere, from a renewed interest in the therapeutic effects of LSD and micro-dosing, to the popularity of the ayahuasca trips and the annual spectacle of Burning Man.  Now, for a new generation seeking the trip of a lifetime, The Psychedelic Experience is the essential guidebook to getting there.

The updated edition includes a dedication to Aldous Huxley with a short introductory citation from Huxley's book The Doors of Perception, which was used by the Beatles in the song Tomorrow Never Knows and a brand-new introduction by Daniel Pinchbeck, author of Breaking Open the Head: A Psychedelic Journey into the Heart of Contemporary Shamanism.

“It is a book for the living as well as for the dying.”
—Lama Govinda, founder of the Arya Maitreya Mandala
Timothy Leary was one of the most famous countercultural icons of the 1960s. In 1957, the Harvard psychologist experienced a “profound transcendent experience” while taking hallucinogens in Mexico. No longer content with his work in personality assessment, Leary began advocating the psychotherapeutic and spiritual benefits of LSD. His “experiments” with LSD often involved students and wild “tripping” parties, which eventually led to his dismissal from Harvard. With patronage from heirs of the Mellon fortune, Leary continued his experiments and prolific writing career at an estate in upstate New York known as Millbrook. In 1967, Leary spoke at a San Francisco “Be‑In,” where he coined the phrase “Turn on, tune in, drop out.” Labeled as the “Most Dangerous Man in America,” Leary had many run‑ins with the law and served several prison sentences. He died of prostate cancer in 1996; the following year seven grams of his ashes were launched into space aboard a Pegasus rocket.

Ralph Metzner is a professor emeritus of psychology at the California Institute for Integral Studies and president of the Green Earth Foundation, a nonprofit organization dedicated to reconnecting humans and the environment. He is also well known for his decades of research and writing on the subjects of consciousness, psychedelics, the practice of yoga, meditation and shamanism.

Richard Alpert, also known as Ram Dass, is a former professor who conducted controversial LSD experiments with Timothy Leary at Harvard and Millbrook. He eventually made a philosophical split from Leary and traveled to India to study Hinduism and yoga. This transformational experience led him to write the classic spiritual text Be Here Now. Having founded a number of spiritual organizations that promote personal growth, the importance of serving others, and unity among different religious traditions, Ram Dass is considered one of the most important spiritual teachers of the 20th century.

Daniel Pinchbeck is the author of Breaking Open the Head: A Psychedelic Journey into the Heart of Contemporary Shamanism and 2012: The Return of Quetzalcoatl. His writing has appeared in The New York Times Magazine, Rolling Stone, ArtForum, and many other publications. He launched the web magazine Reality Sandwich and has written columns for Conscious Living and Dazed & Confused. In much of his recent work, he explores the profound implications of the shamanic experience and the possibility that a revival of archaic knowledge of visionary plants and psychedelic substances could accelerate a transformation of global consciousness.