Is God A White Racist?: A Preamble to Black Theology (Paperback) 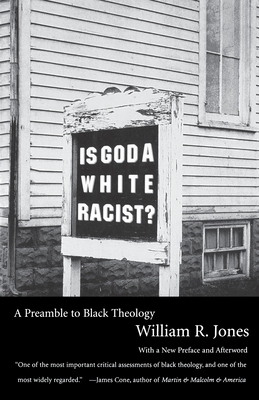 Is God A White Racist?: A Preamble to Black Theology (Paperback)


Not On Our Shelves—Ships in 1-5 Days
Published originally as part of C. Eric Lincoln's series on the black religious experience, Is God a White Racist? is a landmark critique of the black church's treatment of evil and the nature of suffering. In this powerful examination of the early liberation methodology of James Cone, J. Deotis Roberts, and Joseph Washington, among others, Jones questions whether their foundation for black Christian theism—the belief in an omnibenevolent God who has dominion over human history—can provide an adequate theological foundation to effectively dismantle the economic, social, and political framework of oppression.

Seeing divine benevolence as part of oppression's mechanism of disguise, Jones argues that black liberation theologians must adopt a new theism that is informed by humanism and its principle of the functional ultimacy of wo/man, where human choice and action determine whether our condition is slavery or freedom.
William R. Jones (1933-2012) was a professor of religion and director of black studies at Florida State University. A well-known and respected African American theologian and scholar, he was the author of the groundbreaking book Is God A White Racist?, a deep and profound look at the connections between natural evil and social oppression.
One of the most important critical assessments of black theology, and one of the most widely regarded. —James Cone, author of Martin & Malcolm & America

"Black religious humanism has no more articulate exponent than William R. Jones. No liberation theology, black or white, can afford to ignore his searing critique of the idea of God's omnibenevolence, or the link he makes between natural evil and social oppression. For all that, he expounds not fatalism, but humanistic hope for us all." —John A. Buehrens, president, Unitarian Universalist Association of Congregations