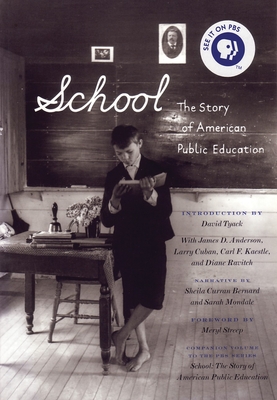 
Special Order—Subject to Availability
Esteemed historians of education David Tyack, Carl Kaestle, Diane Ravitch, James Anderson, and Larry Cuban journey through history and across the nation to recapture the idealism of our education pioneers, Thomas Jefferson and Horace Mann. We learn how, in the first quarter of the twentieth century, massive immigration, child labor laws, and the explosive growth of cities fueled school attendance and transformed public education, and how in the 1950s public schools became a major battleground in the fight for equality for minorities and women. The debate rages on: Do today's reforms challenge our forebears' notion of a common school for all Americans? Or are they our only recourse today?

This lavishly illustrated companion book to the acclaimed PBS documentary, School, is essential reading for anyone who cares about public education.
Sarah Mondale is president and co-director of Stone Lantern Films, as well as a public school teacher in New York. She directed and co-produced the award-winning PBS series School (narrated by Meryl Streep), PBS primetime film Marcel Proust, Emmy award-winning Asylum and Megamall. Her most recent film, Backpack Full of Cash (2016) explores the privatization of public schools in America.
[An] exemplary, thoroughly readable account.
-Publishers Weekly

"This book takes you through the history of how the idea of public education began, to where we are right now. . . . It's so beautifully done, judiciously done, and I'm really proud to help it along."
--Meryl Streep