The Fearless Benjamin Lay: The Quaker Dwarf Who Became the First Revolutionary Abolitionist With a New Preface (Paperback) 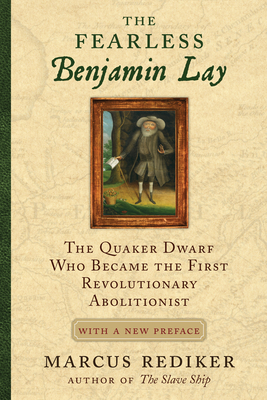 The Fearless Benjamin Lay: The Quaker Dwarf Who Became the First Revolutionary Abolitionist With a New Preface (Paperback)


Not On Our Shelves—Ships in 1-5 Days
The little-known story of an eighteenth-century Quaker dwarf who fiercely attacked slavery and imagined a new, more humane way of life

In The Fearless Benjamin Lay, renowned historian Marcus Rediker chronicles the transatlantic life and times of a singular man—a Quaker dwarf who demanded the total, unconditional emancipation of all enslaved Africans around the world. Mocked and scorned by his contemporaries, Lay was unflinching in his opposition to slavery, often performing colorful guerrilla theater to shame slave masters, insisting that human bondage violated the fundamental principles of Christianity. He drew on his ideals to create a revolutionary way of life, one that embodied the proclamation “no justice, no peace.”

Lay was born in 1682 in Essex, England. His philosophies, employments, and places of residence—spanning England, Barbados, Philadelphia, and the open seas—were markedly diverse over the course of his life. He worked as a shepherd, glove maker, sailor, and bookseller. His worldview was an astonishing combination of Quakerism, vegetarianism, animal rights, opposition to the death penalty, and abolitionism.

While in Abington, Philadelphia, Lay lived in a cave-like dwelling surrounded by a library of two hundred books, and it was in this unconventional abode where he penned a fiery and controversial book against bondage, which Benjamin Franklin published in 1738. Always in motion and ever confrontational, Lay maintained throughout his life a steadfast opposition to slavery and a fierce determination to make his fellow Quakers denounce it, which they finally began to do toward the end of his life.

With passion and historical rigor, Rediker situates Lay as a man who fervently embodied the ideals of democracy and equality as he practiced a unique concoction of radicalism nearly three hundred years ago. Rediker resurrects this forceful and prescient visionary, who speaks to us across the ages and whose innovative approach to activism is a gift, transforming how we consider the past and how we might imagine the future.
Marcus Rediker is Distinguished Professor of Atlantic History at the University of Pittsburgh and Senior Research Fellow at the Collège d’études mondiales in Paris. His books have won numerous awards and been translated into fourteen languages. They include The Many-Headed Hydra (Beacon Press, 2000; with Peter Linebaugh), Villains of All Nations (Beacon Press, 2004), The Slave Ship (2007), The Amistad Rebellion (2012), and Outlaws of the Atlantic (Beacon Press, 2015). Rediker is also the producer of the prize-winning documentary film Ghosts of Amistad: In the Footsteps of the Rebels (Tony Buba, director), about the popular memory of the 1839 Amistad rebellion in contemporary Sierra Leone. He lives in Pittsburgh, Pennsylvania.
“Rediker provides a valuable addition to abolitionist historiography. . . . A concise, solid biography of ‘the first revolutionary abolitionist,’ a diminutive man who was decades ahead of his time.”
—Kirkus Reviews

“Lay, a lover of books, would have appreciated this one, less for the praise lavished on him than the attention given his message. As Mr. Rediker says, ‘Benjamin’s prophecy speaks to our time.’”
—The Pittsburgh Post–Gazette

“Admirers of Marcus Rediker’s splendid The Slave Ship will be delighted by this historian’s new book. Sailor, pioneer of guerilla theater, and a man who would stop at nothing to make his fellow human beings share his passionate outrage against slavery, Benjamin Lay has long needed a modern biographer worthy of him, and now he has one.”
—Adam Hochschild

“A modern biography of the radical abolitionist Benjamin Lay has long been overdue. With the sure hand of an eminent historian of the disfranchised, Marcus Rediker has brought to life the wide-ranging activism of this extraordinary Quaker, vegetarian dwarf in a richly crafted book. In fully recovering Lay’s revolutionary abolitionist vision, Rediker reveals its ongoing significance for our world.”
—Manisha Sinha, author of The Slave’s Cause: A History of Abolition

“The unswerving eighteenth-century abolitionist Benjamin Lay, maligned when not ignored for many generations, has at last found his sympathetic biographer. In this captivating, must-read book, Marcus Rediker shows that Lay’s disfigured body contained a mind of steel and a heart overflowing with compassion for victims of the Atlantic slave trade. Lay’s place in the annals of American reform is now secure. If you’re ready to have your mind changed about received wisdom on the eccentric, lonely early abolitionist who blazed the way for later antislavery stalwarts, read this brilliantly researched and passionately written book.”
—Gary Nash, author of Warner Mifflin, Unflinching Quaker Abolitionist