Finnish Lessons 2.0: What Can the World Learn from Educational Change in Finland? (Paperback) 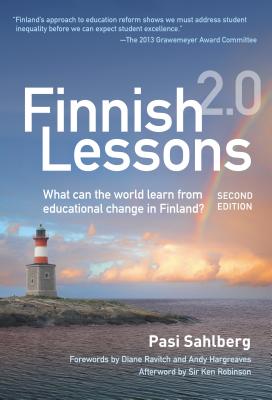 Finnish Lessons 2.0: What Can the World Learn from Educational Change in Finland? (Paperback)

The first edition of Finnish Lessons won the prestigious Grawemeyer Award in Education in 2013. It was featured in The New York Times, The Washington Post, The New York Review of Books, The Atlantic, The Guardian, CNN, Education Week, The Huffington Post, and Dan Rather Reports and has been translated into 16 languages.

Now, with Finnish Lessons 2.0, Pasi Sahlberg has thoroughly updated his groundbreaking account of how Finland built a world-class education system during the past four decades. In this international bestseller, Sahlberg traces the evolution of Finnish education policies and highlights how they differ from the United States and much of the rest of the world. Featuring substantial additions throughout the text, Finnish Lessons 2.0 demonstrates how systematically focusing on teacher and leader professionalism, building trust between the society and its schools, and investing in educational equity rather than competition, choice, and other market-based reforms make Finnish schools an international model of success. This second edition details the complexity of meaningful change by examining Finland's educational performance in light of the most recent international assessment data and domestic changes. In the midst of continuous local reforms and global changes, Finnish Lessons 2.0 encourages educators, students, and policymakers to look beyond their own borders as they seek successful solutions for their education systems, districts, and schools.

International Acclaim for the first edition of Finnish Lessons :

"Sahlberg speaks directly to the sense of crisis about educational achievement in the United States and many other nations."

Diane Ravitch in The New York Review of Books, March 8, 2012

"This book will give hope, vision, and strategies to anyone who is sincere in bringing a great education to every child. Pick it up and read it."

"Sahlberg's book contains important insights for a broad range of academics, educators, politicians, and the public."

" Finnish Lessons is an important book and educators need to read it."

"Every educator and every parent in America should read Pasi Sahlberg's book, Finnish Lessons."

"Simply put the one must read to begin to understand how Finland has built perhaps the world's most successful educational system over the past few decades."

"His new book, Finnish Lessons, tells the story of educational reform and change in Finland over the past fifty years and as he tells the story, it becomes less miraculous and more obviously the outline of a purposeful, thoughtful, and coherent strategy for school improvement."

" Finnish Lessons provides insight into the historical context which underlies Finland's educational success. It sounds too good to be true, and for countries that lack the same degree of social capital, it may well be. Nonetheless, there's no doubt that all nations could benefit from taking some pages from Finland's play book."

"Pasi Sahlberg, in his landmark book Finnish Lessons, makes the point that Finland's development of extensive student achievement standards proved to be a very important landmark on the trajectory of Finland's rise to world class status in the education arena."

" Finnish Lessons provides valuable evidence that investing in teachers and instruction--rather than in tests and inspections--can bring about admirable, even excellent, results."

"If we can adapt any part of these Finnish lessons by applying them in our own settings, perhaps the wicked problem of reforming education and lifelong learning in our country will become a little less wicked."

"The greatest value of his book is not his description of what Finnish schools are doing now. The test scores can tell us that. But he also shows us how the schools achieved their successes, and where they might go from here."

Pasi Sahlberg is a visiting professor at Harvard Graduate School of Education and former Director General of CIMO (Centre for International Mobility) at the Finnish Ministry of Education and Culture. Visit the author's website at www.pasisahlberg.com.