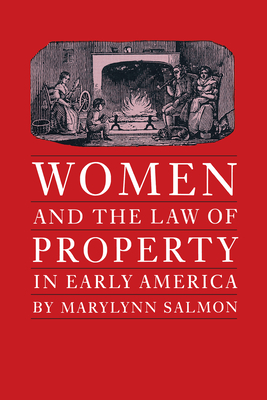 
Not On Our Shelves—Ships in 1-5 Days
In this first comprehensive study of women's property rights in early America, Marylynn Salmon discusses the effect of formal rules of law on women's lives. By focusing on such areas such as conveyancing, contracts, divorce, separate estates, and widows' provisions, Salmon presents a full picture of women's legal rights from 1750 to 1830.

Salmon shows that the law assumes women would remain dependent and subservient after marriage. She documents the legal rights of women prior to the Revolution and traces a gradual but steady extension of the ability of wives to own and control property during the decades following the Revolution. The forces of change in colonial and early national law were various, but Salmon believes ideological considerations were just as important as economic ones.

Women did not all fare equally under the law. In this illuminating survey of the jurisdictions of Connecticut, Massachusetts, New York, Pennsylvania, Maryland, Virginia, and South Carolina, Salmon shows regional variations in the law that affected women's autonomous control over property. She demonstrates the importance of understanding the effects of formal law on women''s lives in order to analyze the wider social context of women's experience.
Marylynn Salmon is coauthor of "Inheritance and the Evolution of Capitalism and the Family in America."