Official Secrets: What the Nazis Planned, What the British and Americans Knew (Paperback) 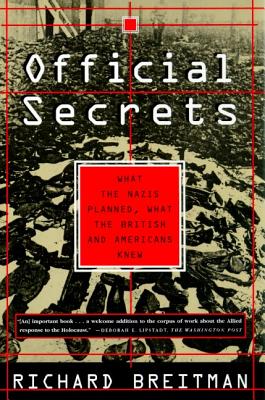 Official Secrets: What the Nazis Planned, What the British and Americans Knew (Paperback)

Richard Breitman's Official Secrets is an important work based on newly declassified archives.

As defeat loomed over the Third Reich in 1945, its officials tried to destroy the physical and documentary evidence about the Nazis' monstrous crimes, about their murder of millions. Great Britain already had some of the evidence, however, for its intelligence services had for years been intercepting, decoding, and analyzing German police radio messages and SS ones, too. Yet these important papers were sealed away as "Most Secret," "Never to Be Removed from This Office"-and they have only now reappeared.

Integrating this new evidence with other sources, Richard Breitman reconsiders how Germany's leaders brought about the Holocaust-and when-and reassesses Britain's and America's suppression of information about the Nazi killings. His absorbing account of the tensions between the two powers and the consequences of keeping this information secret for so long shows us the danger of continued government secrecy, which serves none of us well, and the failure to punish many known war criminals.

Richard Breitman, professor of history at American University, is the author of Architect of Genocide, a biography of Himmler. He lives in Bethesda, Maryland.

“A new tour de force from Breitman . . . sure to revise greatly our knowledge of the planning and implementation of the Final Solution.” —Konrad Kwiet