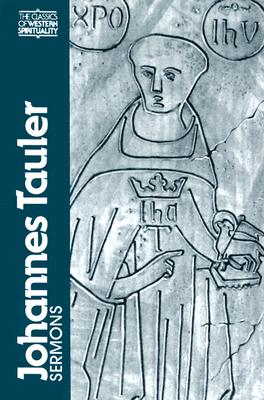 
Special Order—Subject to Availability
Promises to be one of the most important tools for the teaching of Western religious traditions. Bernard McGinn University of Chicago Divinity School Johannes Tauler: Sermons translation by Maria Shrady introduction by Josef Schmidt preface by Alois Haas May God help us to prepare a dwelling place for this noble birth, so that we may all attain spiritual motherhood. Johannes Tauler (c. 1300-1361) Along with Meister Eckhart and Henry Suso, Johannes Tauler (c. 1300-1361) was one of the most influential German mystical writers of the fourteenth century. Born in Strasbourg, he spent virtually all of his life there working as a mendicant preacher in the Order of Preachers. A product of the newly ascendant merchant class, he attempted to address its concern for a practical, active spirituality while being true to the apophatic tradition that he saw in Eckhart. If Eckhart can be called the greatest theoretician of the spiritual life in fourteenth-century Europe, then Tauler was certainly the one who most effectively interpreted Eckhart's message to a broader audience, adding a measure of balance and clarity lacking in his master. Tauler's sermons were among the most influential spiritual writings of the late middle ages, esteemed in their own day by their hearers and later by both Catholics and Protestants. This translation of selected sermons by Maria Shrady captures the brilliance and perspicuity that has made Tauler famous. Summing up his contribution, Josef Schmidt writes in his introduction to this volume: He was preaching in the context of an everyday medieval reality which he tried to make translucent for men of good will, enabling them to return to what he perceived to be the ultimate union: the return to God. +