Making Sense of the Constitution: A Primer on the Supreme Court and Its Struggle to Apply Our Fundamental Law (Paperback) 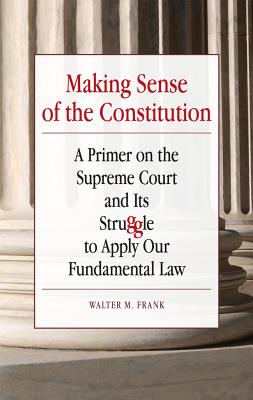 Making Sense of the Constitution: A Primer on the Supreme Court and Its Struggle to Apply Our Fundamental Law (Paperback)

In Making Sense of the Constitution: A Primer on the Supreme Court and Its Struggle to Apply Our Fundamental Law, Walter Frank tackles in a comprehensive but lively manner subjects rarely treated in one volume.

Aiming at both the general reader and students of political science, law, or history, Frank begins with a brief discussion of the nature of constitutional law and why the Court divides so closely on many issues. He then proceeds to an analysis of the Constitution and subsequent amendments, placing them in their historical context. Next, Frank shifts to the Supreme Court and its decisions, examining, among other things, doctrinal developments, the Court’s decision making processes, how justices interact with each other, and the debate over how the Constitution should be interpreted.

The work concludes with a close analysis of Court decisions in six major areas of continuing controversy, including abortion, affirmative action, and campaign finance.


Outstanding by the University Press Books for Public and Secondary Schools

Walter M. Frank enjoyed a thirty-year career with the law department of the Port Authority of New York and New Jersey, retiring as chief of commercial litigation in 2005. During his tenure, in addition to his litigation responsibilities, he negotiated leases for the World Trade Center and served as the Authority’s legal liaison to the New York State Legislature. Since retiring, he has published three law review articles focusing on the relationship between politics and constitutional law.

“Walter Frank’s clear and sober picture of the Supreme Court’s perspective on constitutional law also models the moderation he seeks in future Supreme Court appointments. A useful primer for students and the general reader.”—Jeffrey K. Tulis, University of Texas at Austin

“Making Sense of the Constitution is the civics lesson we all need. It is the most brilliant explanation of what the Supreme Court does that we have ever had. Walter Frank writes with wit and insight, and a profound devotion to the law.” —Michael Zuckerman, professor of history, University of Pennsylvania

“Walter Frank’s lively and immensely readable survey shows how the Supreme Court reaches its decisions and how those decisions have helped shape our nation. If you want to understand how the Supreme Court has used constitutional interpretation to structure America’s government and define the rights of its citizens, this is the book to read.” —Edward Rubin, University Professor of law and political science, Vanderbilt University