The Buck, the Black, and the Existential Hero: Refiguring the Black Male Literary Canon, 1850 to Present (Paperback) 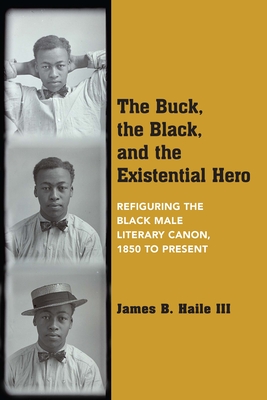 The Buck, the Black, and the Existential Hero: Refiguring the Black Male Literary Canon, 1850 to Present (Paperback)

By James B. Haile, III


Not On Our Shelves—Ships in 1-5 Days
Outstanding Academic Title, CHOICE

The Buck, the Black, and the Existential Hero: Refiguring the Black Male Literary Canon, 1850 to Present combines philosophy, literary theory, and jazz studies with Africana studies to develop a theory of the black male literary imagination. In doing so, it seeks to answer fundamental aesthetic and existential questions: How does the experience of being black and male in the modern West affect the telling of a narrative, the shape or structure of a novel, the development of characters and plot lines, and the nature of criticism itself?

James B. Haile argues that, since black male identity is largely fluid and open to interpretation, reinterpretation, and misinterpretation, the literature of black men has developed flexibility and improvisation, termed the “jazz of life.” Our reading of this literature requires the same kind of flexibility and improvisation to understand what is being said and why, as well as what is not being said and why. Finally, the book attempts to offer this new reading experience by placing texts by well-known authors, such as Frederick Douglass, Ralph Ellison, and Colson Whitehead, in conversation with texts by those who are less well known and those who have, for the most part, been forgotten, in particular, Cecil Brown. Doing so challenges the reader to visit and revisit these novels with a new perspective about the social, political, historical, and psychic realities of black men.

JAMES B. HAILE III is an assistant professor of philosophy at the University of Rhode Island.

“James B. Haile III has fashioned a penetrating lens through which to examine the African American male subject in literature, as well as how this subject is conventionally discussed within literary criticism and philosophy. His introduction of the visual and the theatrical as avenues into thinking about Douglass and, especially, Ellison is exciting in its ability to encourage associations that more conventional ways of approaching such well-known figures leave unnoticed. This will be an important work.” —Anthony Stewart, author of George Orwell, Doubleness, and the Value of Decency

"Haile’s work is exciting because he challenges the forms of scholarly discussion, improvising a form conducive to his experimental explorations. This book will be crucial to future study of Black masculinity and African American literature." —D. E. Magill, Longwood University, CHOICE