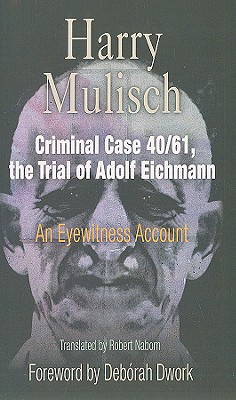 The trial of Adolf Eichmann began in 1961 under a deceptively simple label, criminal case 40/61. Hannah Arendt covered the trial for the New Yorker magazine and recorded her observations in Eichmann in Jerusalem: The Banality of Evil. Harry Mulisch was also assigned to cover the trial for a Dutch news weekly. Arendt would later say in her book's preface that Mulisch was one of the few people who shared her views on the character of Eichmann. At the time, Mulisch was a young and little-known writer; in the years since he has since emerged as an author of major international importance, celebrated for such novels as The Assault and The Discovery of Heaven.

Mulisch modestly called his book on case 40/61 a report, and it is certainly that, as he gives firsthand accounts of the trial and its key players and scenes (the defendant's face strangely asymmetric and riddled by tics, his speech absurdly baroque). Eichmann's character comes out in his incessant bureaucratizing and calculating, as well as in his grandiose visions of himself as a Pontius Pilate-like innocent. As Mulisch intersperses his dispatches from Jerusalem with meditative accounts of a divided and ruined Berlin, an eerily rebuilt Warsaw, and a visit to the gas chambers of Auschwitz, Criminal Case 40/61, the Trial of Adolf Eichmann becomes as a disturbing and highly personal essay on the Nazi extermination of European Jews and on the human capacity to commit evil ever more efficiently in an age of technological advancement. Here presented with a foreword by Deb rah Dwork and translated for the first time into English, Criminal Case 40/61 provides the reader with an unsettling portrait not only of Eichmann's character but also of technological precision and expertise. It is a landmark of Holocaust writing.
Novelist, poet, and critic, Harry Mulisch (1927-2010) was one of the Netherlands' most prominent writers. His last book was the novel Siegfried (2001). Deborah Dwork is the Rose Professor of Holocaust Studies and Modern Jewish History and Culture at Clark University and author of Children with a Star: Jewish Youth in Nazi Europe.