All-Stars and Movie Stars: Sports in Film and History (Hardcover) 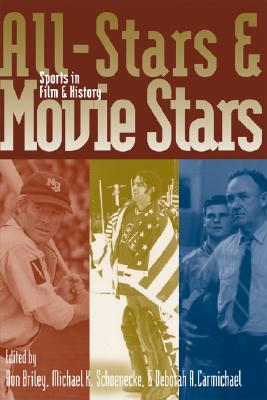 All-Stars and Movie Stars: Sports in Film and History (Hardcover)


Not On Our Shelves—Ships in 1-5 Days
(This book cannot be returned.)
Sports films are popular forms of entertainment around the world, but beyond simply amusing audiences, they also reveal much about class, race, gender, sexuality, and national identity. In All-Stars and Movie Stars, Ron Briley, Michael K. Schoenecke, and Deborah A. Carmichael explore the interplay between sports films and critical aspects of our culture, examining them as both historical artifacts and building blocks of ideologies, values, and stereotypes. The book covers not only Hollywood hits.
Ron Briley, assistant headmaster and teacher of history at Sandia Preparatory School, is the author of Class at Bat, Gender on Deck and Race in the Hole: A Line-Up of Essays on Twentieth Century Culture and America's Game.Michael K. Schoenecke is professor of literature and languages at Texas Tech University. Deborah A. Carmichael, assistant professor at Michigan State University, is associate editor of the journal Film & History and editor of the collection The Landscape of Hollywood Westerns: Ecocriticism in an American Film Genre.