We Will Win the Day: The Civil Rights Movement, the Black Athlete, and the Quest for Equality (Paperback) 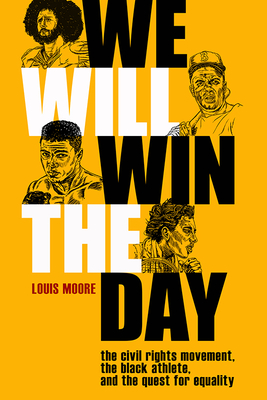 We Will Win the Day: The Civil Rights Movement, the Black Athlete, and the Quest for Equality (Paperback)

In this exceedingly timely book, Louis Moore looks at the history of Black activist athletes and the important role of the Black community in insisting that the concept of fair play should apply not only to sports but to all segments of society. Arranged thematically, the book details Jackie Robinson's entry into baseball in 1945, when he signed with the Dodgers, and includes the revolt of Black athletes in the late 1960s, symbolized by Tommie Smith and John Carlos famously raising their clenched fists during a medal ceremony at the 1968 Olympics. Accounts from the Black press and the athletes themselves help illustrate the role Black athletes played in the civil rights movement. At the same time, the book also examines how the Black public viewed sports and the contributions of Black athletes during these tumultuous decades, showing how a shared belief in merit and democracy―combined with Black athletic success―influenced the push for civil rights.

By examining the connections between sports, Black athletes, and the civil rights movement, We Will Win the Day puts the athletes and their stories into the proper context. Rather than romanticizing these men and women and their experiences, it uses the roles they played―or chose not to play―to illuminate the complexities and nuances in the relationship between Black athletes and the fight for racial equality.

Louis Moore is associate professor of history at Grand Valley State University, where he teaches African American history, civil rights, sports, and US history. His research and writing examine the interconnection of race, gender, and sports. Moore's other works include I Fight for a Living, a book about boxing, black manhood, and race in America from 1880 to 1915.