The Us Senate and the Commonwealth: Kentucky Lawmakers and the Evolution of Legislative Leadership (Hardcover) 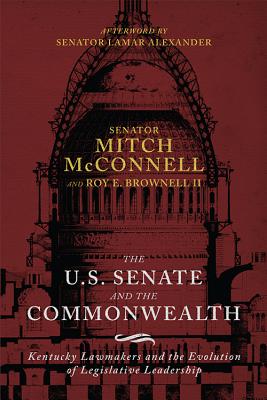 The Us Senate and the Commonwealth: Kentucky Lawmakers and the Evolution of Legislative Leadership (Hardcover)

Kentucky has long punched above its weight in the US Senate, as some of the nation's most distinguished senators have hailed from the Commonwealth. Despite its relatively small population for much of American history, Kentucky has produced a record two Senate majority leaders, a record three Senate majority whips, and one of the country's greatest lawmakers, Henry Clay. These Kentuckians played an important role in the evolution of leadership institutions in the Senate. Official positions suc.

Sen. Mitch McConnell is the longest-serving US Senate Republican leader and longest-serving senator from Kentucky. He has represented the Commonwealth in the upper chamber since January 1985 and has served as Senate majority leader since January 2015. Prior to that, he was leader of the Senate Republican minority for nearly a decade. He is author of The Long Game: A Memoir. Roy E. Brownell II is an attorney and coeditor of the book Magna Carta and the Rule of Law. He has contributed to a number of books and journals on topics related to Congress and the presidency. He is former deputy chief of staff and counsel to Senator McConnell. Prior to his tenure with the senator, he served in the US Department of State.