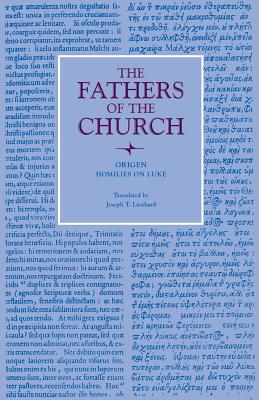 Thirty-nine of Origen's homilies on the Gospel of Luke survive in Jerome's Latin translation. Origen preached them in Caesarea, perhaps around 234 or 240, to a congregation of catechumens and faithful. Most of the homilies are short; on average, they treat about six verses of the Gospel and would have lasted between eight and twelve minutes. The first thirty-three homilies treat chapters one through four of Luke's Gospel; the remaining six treat passages from the tenth to the twentieth chapters.

Origen's homilies are the only extant patristic writing devoted to Luke's Gospel before Ambrose's Exposition on Luke, written ca. 390 (and Ambrose himself followed Oorigen, sometimes quite closely). Homilies 1 to 20 also constitute the only existing commentary from the pre-Nicene Church on either Infancy Narrative. Several hundred fragments of Origen's homilies and commentary on Luke also survive, mostly in Greek.

Henri de Lubac formulated the important principle, "Observe Origen at work," and Origen's writings on Luke's Gospel are an intriguing place to do that. Origen, the champion of spiritual interpretation, regulary beings with a painfully literal reading of the text. His first unit of understanding is the word, and often the key that unlocks the meaning of a word in the Bible for him is the use of that same word elsewhere in Scripture. Origen assumed that each word had a meaning that is both profound and relevant to the reader--for the Holy Spirit is never trite and what the Holy Spirit says must always touch the hearer.

This volume, the first English translation of the extant homilies and of fragments from the commentary on Luke, is an important addition to the growing body of Origen's work now available in English.