Disenchanted Lives: Apostasy and Ex-Mormonism among the Latter-day Saints (Hardcover) 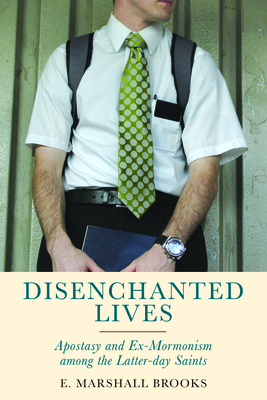 Disenchanted Lives: Apostasy and Ex-Mormonism among the Latter-day Saints (Hardcover)


Special Order—Subject to Availability
The Church of Jesus Christ of Latter-day Saints (LDS or Mormons), often heralded as the fastest growing religion in American history, is facing a crisis of apostasy. Rather than strengthening their faith, the study of church history and scriptures by many members pushes them away from Mormonism and into a growing community of secular ex-Mormons. In Disenchanted Lives, E. Marshall Brooks provides an intimate, in-depth ethnography of religious disenchantment among ex-Mormons in Utah. Showing that former church members were once deeply embedded in their religious life, Brooks argues that disenchantment unfolds as a struggle to overcome the spiritual, social, and ideological devotion ex-Mormons had to the religious community and not out of a lack of dedication as prominently portrayed in religious and scholarly writing on apostasy.
E. Marshall Brooks is an assistant professor in the Department of Family Medicine and Population Health and lectures in the School of World Studies at Virginia Commonwealth University in Richmond.
"An extremely frank, thoughtful, compelling, and analytically rich exploration of contemporary apostasy and religious defection within a Mormon context. As more and more people walk away from their religion, it is essential that we understand the various dynamics at play—and Brooks's investigation on this front is not only highly readable, but extremely insightful. One of the best in-depth studies of apostasy I've ever encountered. Brooks's Disenchanted Lives is excellent. Highly recommended."
— Phil Zuckerman

"Brooks has written a must-read for anyone interested in the LDS Church or the formerly religious. His ethnography is a well-researched and deeply informative study of the ties that bind ex-Mormons to the religion they’ve left behind—and the tremendous work they undertake to cut them. His focus on apostasy fills a clear gap in the growing literature on secular people, and his measured account of the challenges facing the Mormon Church is an important contribution to Mormon Studies."
— Joseph Blankholm

"Disenchanted Lives is one of the best examinations of religious belief and disbelief published in recent years. It shines in the way Brooks illustrates social science processes with case studies. This is an excellent book worth reading by all who are interested in religion and religious disaffiliation."
— Free Inquiry

"The strongest and most intriguing section of the book observes the ways that disenchantment is not simply a matter of rationality and reason coming to win out over faith, but how there are 'emotional, psychological, and embodied dimensions' of leaving the church and its beliefs as well."
— Mormon Studies Review

"Contributes to the larger matter in religious studies of why people leave faith traditions even after years of investment."
— Reading Religion

"The book is balanced and well-informed, driven not by ideology but by a desire to position the ex-Mormon experience with sensitivity and in the light of other scholarship on religious disaffection. It makes four primary contributions to advance the existing literature."
— Dialogue Journal