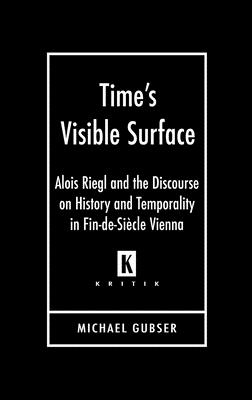 Alois Riegl's art history has influenced thinkers as diverse as Erwin Panofsky, Georg Lukacs, Walter Benjamin, Paul Feyerabend, Gilles Deleuze, and F?lix Guattari. One of the founders of the modern discipline of art history, Riegl is best known for his theories of representation. Yet his inquiries into the role of temporality in artistic production-including his argument that art conveys a culture's consciousness of time-show him to be a more wide-ranging and influential commentator on historiographical issues than has been previously acknowledged. In Time's Visible Surface, Michael Gubser presents Riegl's work as a sustained examination of the categories of temporality and history in art. Supported by a rich exploration of Riegl's writings, Gubser argues that Riegl viewed artworks as registering historical time visibly in artistic forms.

Gubser's discussion of Riegl's academic milieu also challenges the widespread belief that Austrian modernism adopted a self-consciously ahistorical worldview. By analyzing the works of Riegl's professors and colleagues at the University of Vienna, Gubser shows that Riegl's interest in temporality, from his early articles on calendar art through later volumes on the Roman art industry and Dutch portraiture, fit into a broad discourse on time, history, and empiricism that engaged Viennese thinkers such as the philosopher Franz Brentano, the historian Theodor von Sickel, and the art historian Franz Wickhoff. By expanding our understanding of Riegl and his intellectual context, Time's Visible Surface demonstrates that Riegl is a pivotal figure in cultural theory and that fin-de-si?cle Vienna holds continued relevance for today's cultural and philosophical debates.