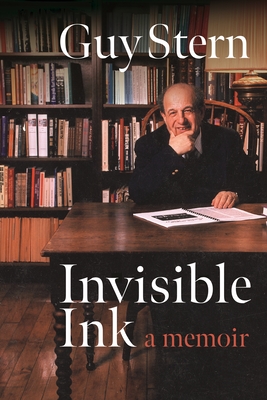 Invisible Ink is the story of Guy Stern's remarkable life. This is not a Holocaust memoir; however, Stern makes it clear that the horrors of the Holocaust and his remarkable escape from Nazi Germany created the central driving force for the rest of his life. Stern gives much credit to his father's profound cautionary words, "You have to be like invisible ink. You will leave traces of your existence when, in better times, we can emerge again and show ourselves as the individuals we are." Stern carried these words and their psychological impact for much of his life, shaping himself around them, until his emergence as someone who would be visible to thousands over the years.

This book is divided into thirteen chapters, each marking a pivotal moment in Stern's life. His story begins with Stern's parents-"the two met, or else this chronicle would not have seen the light of day (nor me, for that matter)." Then, in 1933, the Nazis come to power, ushering in a fiery and destructive timeline that Stern recollects by exact dates and calls "the end of his] childhood and adolescence." Through a series of fortunate occurrences, Stern immigrated to the United States at the tender age of fifteen. While attending St. Louis University, Stern was drafted into the U.S. Army and soon found himself selected, along with other German-speaking immigrants, for a special military intelligence unit that would come to be known as the Ritchie Boys (named so because their training took place at Ft. Ritchie, MD). Their primary job was to interrogate Nazi prisoners, often on the front lines. Although his family did not survive the war (the details of which the reader is spared), Stern did. He has gone on to have a long and illustrious career as a scholar, author, husband and father, mentor, decorated veteran, and friend. Invisible Ink is a story that will have a lasting impact. If one can name a singular characteristic that gives Stern strength time after time, it is his resolute determination to persevere. To that end Stern's memoir provides hope, strength, and graciousness in times of uncertainty.
Guy Stern is Distinguished Professor Emeritus in the Department of Classical and Modern Languages, Literatures, and Cultures at Wayne State University. He is currently director of the Harry and Wanda Zekelman International Institute of the Righteous at the Holocaust Memorial Center Zekelman Family Campus. He is the author of War, Weimar, and Literature: The Story of the Neue Merkur, Literature and Culture in Exile, and numerous scholarly papers.