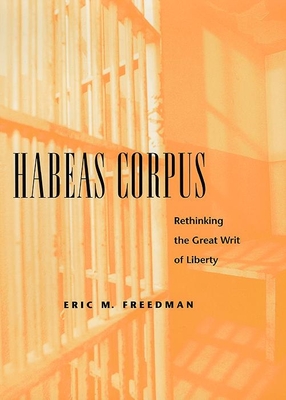 Habeas Corpus is the process by which state prisoners--particularly those on death row--appeal to federal courts to have their convictions overturned. Its proper role in our criminal justice system has always been hotly contested, especially in the wake of 1996 legislation curtailing the ability of prisoners to appeal their sentences.
In this timely volume, Eric M. Freedman reexamines four of the Supreme Court's most important habeas corpus rulings: one by Chief Justice John Marshall in 1807 concerning Aaron Burr's conspiracy, two arising from the traumatic national events of the 1915 Leo Frank case and the 1923 cases growing out of murderous race riots in Elaine County, Arkansas, and one case from 1953 that dramatized some of the ugliest features of the Southern justice of the period. In each instance, Freeman uncovers new original sources and tells the stories of the cases through such documents as the Justices' draft opinions and the memos of law clerk William H. Rehnquist. In bracing and accessible language, Freedman then presents an interpretation that rewrites the conventional view.
Building on these results, he challenges legalistic limits on habeas corpus and demonstrates how a vigorous writ is central to implementing the fundamental conceptions of individual liberty and constrained government power that underlie the Constitution.

Eric M. Freedman is a Professor of Law at Hofstra University School of Law.