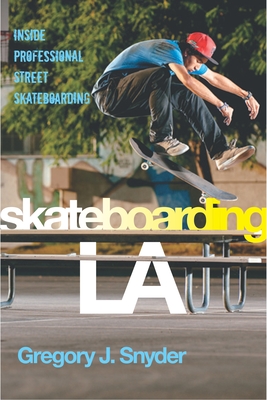 This is book number 10 in the Alternative Criminology series.

Inside the complex and misunderstood world of professional street skateboarding

On a sunny Sunday in Los Angeles, a crew of skaters and videographers watch as one of them attempts to land a "heel flip" over a fire hydrant on a sidewalk in front of the Biltmore Hotel. A staff member of the hotel demands they leave and picks up his phone to call the police.Not only does the skater land the trick, but he does so quickly, and spares everyone the unwanted stress of having to deal with the cops. This is not an uncommon occurrence in skateboarding, which is illegal in most American cities and this interaction is just part of the process of being a professional street skater. This is just one of Gregory Snyder's experiences from eight years inside the world of professional street skateboarding: a highly refined, athletic and aesthetic pursuit, from which a large number of people profit. Skateboarding LA details the history of skateboarding, describes basic and complex tricks, tours some of LA's most famous spots, and provides an enthusiastic appreciation of this dangerous and creative practice. Particularly concerned with public spaces, Snyder shows that skateboarding offers cities much more than petty vandalism and exaggerated claims of destruction. Rather, skateboarding draws highly talented young people from around the globe to skateboarding cities, building a diverse and wide-reaching community of skateboarders, filmmakers, photographers, writers, and entrepreneurs. Snyder also argues that as stewards of public plazas and parks, skateboarders deter homeless encampments and drug dealers. In one stunning case, skateboarders transformed the West LA Courthouse, with Nike's assistance, into a skateable public space. Through interviews with current and former professional skateboarders, Snyder vividly expresses their passion, dedication and creativity. Especially in relation to the city's architectural features--ledges, banks, gaps, stairs and handrails--they are constantly re-imagining and repurposing these urban spaces in order to perform their ever-increasingly difficult tricks. For anyone interested in this dynamic and daunting activity, Skateboarding LA is an amazing ride.