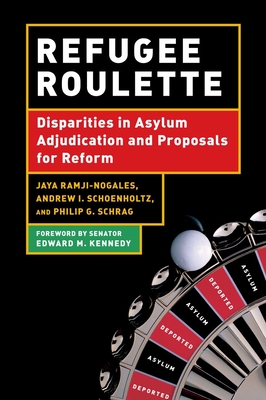 Through the Refugee Act of 1980, the United States offers the prospect of safety to people who flee to America to escape rape, torture, and even death in their native countries. In order to be granted asylum, however, an applicant must prove to an asylum officer or immigration judge that she has a well-founded fear of persecution in her homeland. The chance of winning asylum should have little if anything to do with the personality of the official to whom a case is randomly assigned, but in a ground-breaking and shocking study, Jaya Ramji-Nogales, Andrew I. Schoenholtz, and Philip G. Schrag learned that life-or-death asylum decisions are too frequently influenced by random factors relating to the decision makers. In many cases, the most important moment in an asylum case is the instant in which a clerk randomly assigns the application to an adjudicator. The system, in its current state, is like a game of chance.

Refugee Roulette is the first analysis of decisions at all four levels of the asylum adjudication process: the Department of Homeland Security, the immigration courts, the Board of Immigration Appeals, and the United States Courts of Appeals. The data reveal tremendous disparities in asylum approval rates, even when different adjudicators in the same office each considered large numbers of applications from nationals of the same country. After providing a thorough empirical analysis, the authors make recommendations for future reform. Original essays by eight scholars and policy makers then discuss the authors' research and recommendations

Philip G. Schrag is the Delaney Family Professor of Public Interest Law and Director of the Center for Applied Legal Studies at Georgetown University Law Center.