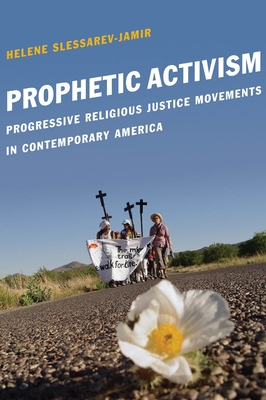 While the links between conservative Christians and politics have been drawn strongly in recent years, coming to embody what many think of as religious activism, the profoundly religious nature of community organizing and other more left-leaning justice work has been largely overlooked. Prophetic Activism is the first broad comparative examination of progressive religious activism in the United States. Set up as a counter-narrative to religious conservatism, the book offers readers a deeper understanding of the richness and diversity of contemporary religious activism.
Helene Slessarev-Jamir offers five case studies of major progressive religious justice movements that have their roots in liberative interpretations of Scripture: congregational community organizing; worker justice; immigrant rights work; peace-making and reconciliation; and global anti-poverty and debt relief. Drawing on intensive interviews with activists at all levels of this work--from pastors and congregational leaders to local organizers and the executive directors of the national networks--she uncovers the ways in which they construct an ethical framework for their work. In addition to looking at predominantly Christian organizations, the book also highlights the growth of progressive activism among Jews, Muslims, and Buddhists who are engaged in reinterpreting their religious texts to support new forms of activism.
Religion and Social Transformation series

Helene Slessarev-Jamir is the Mildred M. Hutchinson Professor of Urban Studies at the Claremont School of Theology. She is the author of "The Betrayal of the Urban Poor."