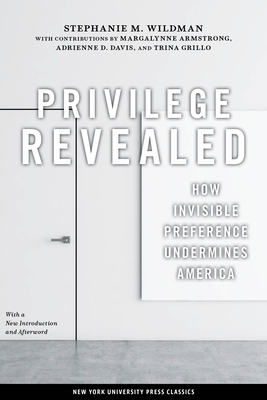 This is book number 48 in the Critical America series.

In this era of #MeToo and #BlackLivesMatter, inequality is at the forefront of American thought like never before. Yet many of the systems of privilege upholding the status quo remain unchanged. Many Americans who advocate a merit-based, race-free worldview do not acknowledge the systems of privilege which benefit them. Men remain at the top of the gender wage gap and white people are five times less likely to be stopped by police than their Black neighbors. White families can build lives using social and financial inheritances that have been denied to Black Americans and immigrants for centuries. Individual chapters focus on language, the workplace, the implications of comparing racism and sexism, race-based housing privilege, the dream of diversity and the cycle of exclusion, the rule of law and invisible systems of privilege, and the power of law to transform society. Twenty-five years since its first publication, Privilege Revealed is more relevant than ever. With a new preface and substantive foreword, this book offers readers important insight into the inequalities still pervading American society and encourages us all to confront our own relationship to these too often invisible privileges.
Stephanie M. Wildman is Professor Emerita at Santa Clara Law and a member of The Writers Grotto.