Stateless: The Politics of the Armenian Language in Exile (Hardcover) 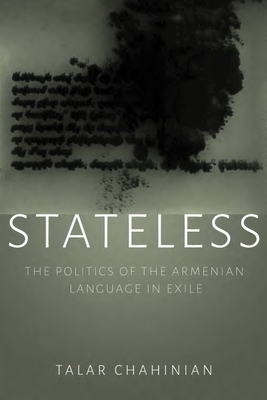 Stateless: The Politics of the Armenian Language in Exile (Hardcover)


Coming Soon—Pre-Order Now
Stateless: The Politics of the Armenian Language in Exile focuses on two centers of Western Armenian literary production following the Armenian genocide to examine the intersection of violence and art, displacement and language vitality. In looking at the work of a post WWI Paris-based, short-lived transnational literary movement called Menk We], it explores how the politically violent origins of dispersion informed the aesthetic development of a new literature and the articulation of literary belonging in exile. In looking at the post WWII activities and publications of the Writers' Association of Syria and Lebanon, it traces how the Armenian diaspora's literature was nationalized in the absence of state institutions. It shows that when Beirut took over as the nucleus of the diaspora's literary activity and intellectuals began to construct a unified and coherent narrative of the diaspora, the city came to be positioned as the thread that connected the current activities to the pre-1915 literary tradition and the Menk generation was excluded from the modern Armenian literary canon due to its writers' attempts to understand diasporic experience as interrupted time. Ultimately, it argues that the adoption of the category of the "national" as the organizing logic of literary production in a diaspora setting limited the long-term vitality of this stateless language, for it ignored the multifarious composition of diaspora communities.
Talar Chahinian holds a Ph.D. in Comparative Literature from UCLA and lectures in the Program for Armenian Studies at UC Irvine, where she is also Visiting Faculty in the Department of Comparative Literature. She co-edits Diaspora: A Journal of Transnational Studies and contributes regularly to the Armenian literary magazine Pakin.