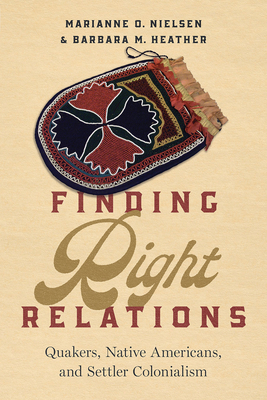 
Not On Our Shelves—Ships in 1-5 Days
Quakers were one of the early settler colonist groups to invade northeastern North America. William Penn set out to develop a “Holy Experiment,” or utopian colony, in what is now Pennsylvania. Here, he thought, his settler colonists would live in harmony with the Indigenous Lenape and other settler colonists.

Centering on the relationship between Quaker colonists and the Lenape people, Finding Right Relations explores the contradictory position of the Quakers as both egalitarian, pacifist people, and as settler colonists. This book explores major challenges to Quaker beliefs and resulting relations with American Indians from the mid-seventeenth century to the late nineteenth century. It shows how the Quakers not only failed to prevent settler colonial violence against American Indians but also perpetuated it. It provides historical examples such as the French and Indian War, the massacre of the Conestoga Indians, and the American Indian boarding schools to explore the power of colonialism to corrupt even those colonists with a belief system rooted in social justice.

While this truth rubs against Quaker identity as pacifists and socially conscious, justice-minded people, the authors address how facing these truths provide ways forward for achieving restitution for the harms of the past. This book offers a path to truth telling that is essential to the healing process.

Marianne O. Nielsen is a professor of criminology and criminal justice at Northern Arizona University. Her most recent book is International, National, and Traditional Law and Indigenous Communities, edited with Karen Jarratt-Snider.

Barbara M. Heather is a retired sociologist whose research, publishing, and teaching focused on social inequality and injustice. She is a member of the Society of Friends.
“Nielsen and Heather provide a nuanced and comprehensive exploration of Quaker entanglement with settler colonialism, and point toward ways in which truth telling, restitution, reparation, and reconciliation might be advanced by building on the commonalities between contemporary Quaker peacemaking and that of the Lenape Nation.”—Polly O. Walker, Director of the Baker Institute for Peace and Conflict Studies at Juniata College